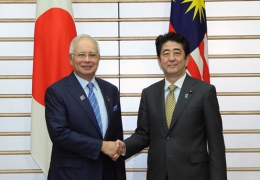 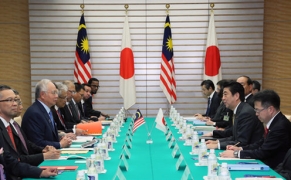 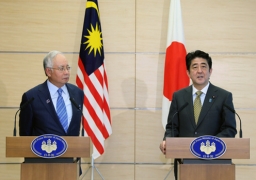 On Thursday, December 12, for approximately 30 minutes from around 11:15 a.m., Mr. Shinzo Abe, the Prime Minister, held a meeting with Dato' Sri Haji Mohd Najib bin Tun Haji Abdul Razak, Prime Minister and Minister of Finance of Malaysia, during his visit to Japan to attend the ASEAN-Japan Commemorative Summit. The meeting proceeded as follows (attending on the Japanese side included Deputy Chief Cabinet Secretary Hiroshige Seko, Mr. Shigeru Nakamura, Ambassador of Japan to Malaysia, among others. Attending on the Malaysian side included Y.B. Dato’ Sri Mustapa bin Mohamed, Minister of International Trade and Industry, among others.).

(1) Based on the recognition that the foundation of Japan-Malaysia close bilateral relations is the multi-layer ties of friendship based on the “Look East” policy, the two leaders endorsed the establishment of a framework for discussion between the two countries to deepen cooperation on the “Second Wave” of the “Look East” policy” that Malaysia is moving into. Moreover, for the purpose of making Malaysia-Japan International Institute of Technology (MJIIT) into a hub for technology education for the whole ASEAN, Prime Minister Abe announced that Japan would support scholarships from the ASEAN countries to pursue their graduate studies at the MJIIT. In response to this, Prime Minister Najib supported the idea.

(2) In the field of economics, the two leaders shared the view that they would continue their cooperation so that Malaysia can achieve the developed nation status by 2020, a target Prime Minister Najib is aiming at. Prime Minister Abe invited Malaysia to leverage Japan’s technology and know-how in infrastructure developments, such as coal-fired power plants. Particularly, in terms of the high-speed railway project, Prime Minister Abe expressed his expectation for Malaysia’ adopting the Shinkansen system, with stressing its cutting edge technology and safety record. In response, Prime Minister Najib acknowledged Japan’s world class technology, and extended invitation for Japanese companies to participate in the bidding.

(3) In the field of maritime security, the two leaders shared the view that they would continue to enhance cooperation, building upon the realization of the first-ever joint exercise between the two countries’ maritime security organizations in September, of this year.

(1) Prime Minister Abe stated that he would like to coordinate with Malaysia, the chair of the ASEAN in 2015, and the two leaders shared the view to continue to work together to build an ASEAN community in 2015.

(2) The two leaders also exchanged opinions on regional and international affairs including the issue of the South China Sea, and Prime Minister Abe explained Japan’s position on China’s establishment of an Air Defense Identification Zone. Moreover, Prime Minister Abe explained that the government of Japan would contribute even more actively to the peace and stability of the region and the international community, based on the principle of “proactive contribution to peace.”