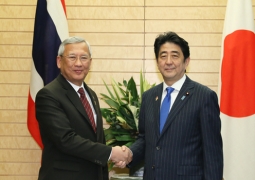 On December 15, commencing at 2:10 p.m. for about 20 minutes, Prime Minister Shinzo Abe received a courtesy call from H.E. Mr. Niwattahamrong, Deputy Prime Minister and Minister of Commerce of the Kingdom of Thailand, who was visiting Japan on behalf of Prime Minister Yingluck of Thailand, to attend the ASEAN-JAPAN Commemorative Summit. The overview of their conversation is as follows.