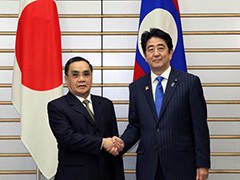 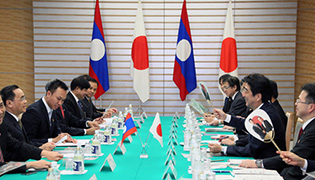 On December 15, from 9:15 a.m. to 9:45 a.m., Prime Minister Shinzo Abe held a meeting with Mr. Thongsing Thammavong, Prime Minister of the Lao People's Democratic Republic, who was visiting Japan to attend the ASEAN-Japan Commemorative Summit Meeting. The outline of the meeting is as follows.

In response, Prime Minister Thongsing expressed gratitude for Japan's hospitality, and said that he was honored to meet with Prime Minister Abe bilaterally again this month following the visit by the Japanese Prime Minister to Laos last month. He also handed out samples of Marugame "uchiwa" fans produced in Laos to the participants of the meeting.

Both leaders shared the view that both sides will coordinate their schedules, with the intention of holding politico-military (PM) dialogue as early as possible in 2014. Prime Minister Abe said that he would like to further strengthen dialogue on political and security issues, through frameworks such as this.

Prime Minister Abe stated that the Japan will continue to support economic and social development of Laos, referring to the signing of an exchange of notes on four development cooperation projects (the Vientiane International Airport Terminal Expansion Project, Ninth Poverty Reduction Support Operation (PRSO), the Project for Construction of Sekong Bridge and the Project for Supporting Unexploded Ordnance Clearance.). In response, Prime Minister Thongsing expressed his appreciation for Japan's support to Laos to date and the four projects signed at this occasion.

The two leaders shared the view that both countries will cooperate closely toward the 60th anniversary of the establishment of diplomatic relations in 2015.

They shared the view that formal negotiations on an air services agreement will commence, in anticipation of the commencement of direct flights between the two countries.

The two leaders exchanged views on regional and international situations, including the issue of the South China Sea. Prime Minister Abe explained Japan's position regarding China's establishment of an Air Defense Identification Zone.

Prime Minister Abe requested the support of Laos on the UN resolution on the situation of human rights in North Korea.