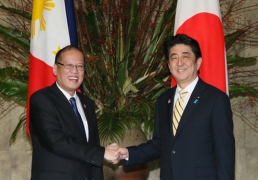 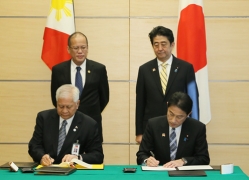 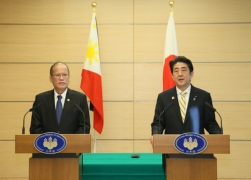 On Friday, December 13, for approximately 60 minutes from around 12:15 pm, Prime Minister Shinzo Abe held a meeting over lunch with H.E. Mr. Benigno S. Aquino III, President of the Republic of the Philippines, during his visit to Japan to attend the ASEAN-Japan Commemorative Summit. The meeting proceeded as follows: those attending on the Japanese side included Mr. Fumio Kishida, Minister for Foreign Affairs; Mr. Hiroshige Seko, Deputy Chief Cabinet Secretary; and Mr. Toshinao Urabe, Ambassador of Japan to the Philippines; those attending on the Philippines side included Mr. Albert F. del Rosario, Secretary of Foreign Affairs.
After the meeting, in the presence of the two leaders, Minister for Foreign Affairs Kishida and Secretary of Foreign Affairs del Rosario signed and exchanged notes between both governments on two official development assistance (ODA) projects, the stand-by loan for disaster recovery and the provision of patrol vessels to the Philippine Coast Guard. They also signed and exchanged notes regarding the amendment to the schedule to the Air Services Agreement between the Government of Japan and the Government of the Philippines.

Prime Minister Abe once again expressed his condolences for the damage caused by the recent typhoon disaster in the Philippines, and said Japan stood ready to continue to extend recovery and reconstruction cooperation in return for the warm support Japan received from the Philippines in the wake of the Great East Japan Earthquake.

2.Recovery and reconstruction from the typhoon disaster in the Philippines

Prime Minister Abe stated Japan sought to be as supportive as possible, and would continue to extend support in the recovery and reconstruction phase. In this context, Prime Minister Abe explained the support Japan intended to provide, including the “stand-by loan for disaster recovery”, the amount of which was increased to 50 billion yen; a newly prepared grant aid worth 6.6 billion yen; and the dispatch of a team of experts to assist with the development of a recovery and reconstruction plan and subsequent infrastructure development, and he expressed the hope that the Philippines would take advantage of this support. In response to this, President Aquino expressed his appreciation for the assistance.

The leaders affirmed their intent to promote bilateral cooperation in accordance with the “four initiatives” in diplomacy with the Philippines announced by Prime Minister Abe in Manila in July. Furthermore, the leaders welcomed the concrete achievements made that would contribute to deepening the bilateral strategic partnership, including the Philippine Government’s formal decision to adopt the Japanese digital terrestrial television broadcasting system, the signing of the exchange of notes on the provision of patrol vessels to the Philippine Coast Guard, and the exchange of letters for the expanded liberalization of air services.