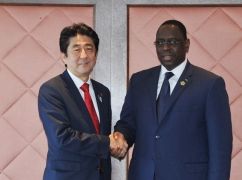 (Photo: Cabinet Public Relations Office)
On May 31, for about 15 minutes from 11:25 am, Prime Minister Shinzo Abe had a meeting with H.E. Mr. Macky Sall, President of the Republic of Senegal in Yokohama, Japan. The following is the gist of the meeting. President Sall is visiting Japan to participate in the Fifth Tokyo International Conference on African Development (TICAD V) held from June 1 to 3 in Yokohama.
1. At the beginning of the meeting, Prime Minister Abe welcomed President Sall’s visit to Japan and expressed his hope for mutual development of Japan and Africa in the wake of TICAD V, which marks the 20th anniversary of the TICAD process. In response, President Sall expressed his sincere appreciation for Japan’s undertakings through the TICAD process. While mentioning that he agrees with Japan’s philosophy that emphasizes human security, Mr. Sall said that his country will work together to realize the goal.

2. President Sall continued and expressed his appreciation for Japanese cooperation. He explained the current situation concerning water and hygiene, and activities of vocational training centers in Senegal and said that he expressed his expectation for support in these areas and cooperation regarding the stabilization of the Sahel region as well as the further promotion of public-private alliance.

3. Prime Minister Abe said that Japan is keen to strengthen relationship with Senegal, a stable democratic power, while paying respect for leadership of President Sall, who doubles as the chairperson of the New Partnership for Africa’s Development (NEPAD). Prime Minister Abe added that he expects President Sall to exert his leadership for improving Senegal’s investment environment. He also informed that Japan has decided to provide new non-project grant aid to assist social development of Senegal.

(Reference) NEPAD (the New Partnership for Africa’s Development)
NEPAD is an initiative led by the African Union implemented by Africa itself for African development. Former President Thabo Mbeki of South Africa proposed the plan. In July 2001, the Organization of African Unity (OAU, current AU: the African Union) Assembly of Heads of State and Government meeting adopted the initiative. Currently, development programs have been established in the areas including infrastructure, agriculture, environment, human development, culture, science and technology and market access, and various programs are being implemented.