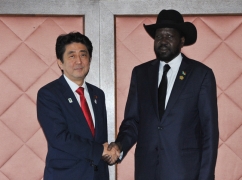 (Photo: Cabinet Public Relations Office)
On May 31, for about 20 minutes from 1:40 pm, Prime Minister Shinzo Abe had a meeting with H. E. Gen. Salva Kiir Mayardit, President of the Republic of South Sudan in Yokohama. The following is the gist of the meeting. President Kiir is visiting Japan to participate in the Fifth Tokyo International Conference on African Development (TICAD V) held from June 1 to June 3.
1. At the beginning, Prime Minister Abe welcomed President Kiir by saying that he was pleased to hold the first Japan-South Sudan summit meeting after South Sudan had achieved independence in July 2011, and then expressed his hope for mutual development of Japan and Africa at the TICAD V, which marks the 20th anniversary of the TICAD process.

2. In response, President Kiir congratulated the 20th anniversary of TICAD and expressed his profound gratitude to Japan for its support to the independence of South Sudan, opening a liaison office of the Government of Japan and cooperation extended by the Japan International Cooperation Agency (JICA) from the pre-independence days. Touching upon the importance of infrastructure building and human resources development for the promotion of the foreign investment in South Sudan, President Kiir expressed that he expects Japan’s assistance and technical cooperation in these areas. He explained formulation of the legislation for South Sudan’s inward investment, and expressed his hope that Japanese companies would enter the market of his country.

3. Prime Minister Abe stated that Japan would continue to provide strong assistance, such as construction of a building a bridge over the Nile and improvement of a river port, in order to help South Sudan to achieve peace and stability. He also stated that the operation of an engineering unit of the Self-Defense Force will be expanded to the states of the Eastern and Western Equatoria. The unit is working under the United Nations Mission in South Sudan (UNMISS), dispatched from Japan. He said that Japanese Embassy in South Sudan is scheduled to open this July. In addition, Prime Minister Abe stated that Japan will consider assisting South Sudan in human resources development and infrastructure building and that he also expects the Japanese companies to expands their business to South Sudan.

5. In addition, the two leaders exchanged their opinions concerning cooperation in the international arena, including the development of Africa.