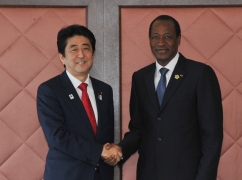 (Photo: Cabinet Public Relations Office)
On May 31, for about 15 minutes from 5:05 pm, Prime Minister Shinzo Abe had a summit meeting with H.E. Mr. Blaise Compaore, President of Burkina Faso. The following is the gist of the meeting. President Compaore is visiting Japan to participate in the Fifth Tokyo International Conference on African Development (TICAD V) held in Yokohama from June 1 to 3.
1. At the beginning of the meeting, Prime Minister Abe expressed his appreciation for President Compaore’s visit to Japan this time and his participation in all TICADs, and also expressed his hope for development both in Africa and Japan at the TICAD V, which marks the 20th anniversary of the TICAD process.

3. Prime Minister Abe welcomed a dramatic advancement of bilateral relationships in recent years, including the opening of the Embassy of Japan in Burkina Faso and the visits of senior officials of Burkina Faso to Japan. Prime Minister Abe also showed his respect for the huge effort made by Burkina Faso to achieve peace and stability in the Sahel, indicating Japan’s intention to strongly support such efforts, and communicated a decision to support anti-terrorism measures and to strengthen the ability to maintain public order. Prime Minister Abe further expressed his intention to continue supporting humanitarian efforts and development in Burkina Faso, and informed President Compaore that the Japanese Government had decided to provide a new aid for rural water supply. Furthermore, Prime Minister Abe mentioned that in time with President Compaore’s visit to Japan, the Japanese Government had determined to double the number of Japan Overseas Cooperation Volunteers dispatched to Burkina Faso.

4. The two leaders also exchanged opinions on the cooperation in the international arena, including development in Africa.