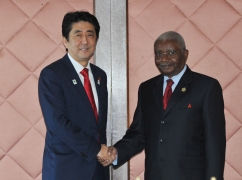 (Photo: Cabinet Public Relations Office)
On May 31, for about 20 minutes from 2:40 pm, Japanese Prime Minister Shinzo Abe had a summit meeting with H.E. Mr. Armando Emílio Guebuza, President of the Republic of Mozambique. The following is the gist of the meeting. President Guebuza is visiting Japan to participate in the 5th Tokyo International Conference on African Development (TICAD V) scheduled to begin tomorrow, on June 1, in Yokohama and will end on June 3.
1. At the beginning, Prime Minister Abe welcomed the reunion with President Guebuza after six years and expressed his hope for development both in Africa and Japan in the wake of TICAD V, which marks the 20th anniversary of TICAD process.

2. In response, President Guebuza remembered back to the dinner with the Prime Minister during his visit to Japan 6 years ago, and expressed his sincere gratitude for Japan’s contribution to the United Nations Operation in Mozambique (ONUMOZ), investments made by Japanese companies, and Japan’s long-term support for Africa through the TICAD process. Moreover, President Guebuza expressed his desire to deepen the cooperative ties between Mozambique and Japan, building upon the existing friendly relationship between the two countries. He also expressed gratitude for the support provided by both the private and public sectors in Japan for the Nacara Corridor comprehensive development program as well as the trilateral development cooperation.

3. Prime Minister Abe welcomed the scheduled signing of a bilateral investment agreement, which will be the first of its kind between Japan and a country in the Sub-Saharan African nations. Abe also said he expects supports from the Mozambican government for a smooth implementation of large-scale investment projects currently implemented by Japanese firms. Furthermore, Abe said that Japan is committed to steadily provide support for the Nacara Corridor comprehensive development program, agricultural aid in the ProSAVANA project, improving infrastructure such as bridges, roads and ports, as well as development of human resources including the construction of a training school for teachers with the Japan’s grant aid which was signed last April.

4. In response, President Guebuza said he strongly believes that the signing of the investment agreement will strengthen bilateral relations between the two countries in the area of trade and investment, and also expressed his intention of extending necessary assistance to Japanese companies for the development of vital natural resources in his country.

5. The two parties also exchanged opinions on the cooperation in the international arena, including issues of development in Africa.