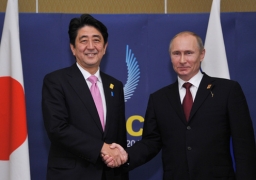 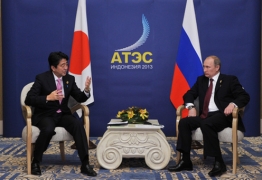 On October 7, commencing at 6:20 p.m. (Indonesia time) for approximately 40 minutes, Prime Minister Shinzo Abe held a summit meeting with Mr. Vladimir Putin, President of the Russian Federation, in Bali in the Republic of Indonesia during his visit there to attend the APEC Summit Meeting. Substantive discussions took place in a genial atmosphere, and the trusting relationship between the two leaders has deepened on a personal level.

(1) President Putin commented on the expansion of human exchanges, in particular the Russian Cultural Festival in Japan, the development of communication among presidents of universities/school and their students, and initiatives to expand human exchanges by Mr. Hakubun Shimomura, Minister of Education, Culture, Sports, Science and Technology.

(2) Prime Minister Abe responded by stating that human exchanges are one of the important keys to the development of Japan-Russia relations, and that he intends to expand such exchanges, especially on the younger generations. He pointed out that currently there are only approximately 300 students from Russia studying in Japan and approximately 100 students from Japan studying in Russia, and stated that he Japan aims to boost each of these numbers five-fold by 2020. Furthermore, he stated that he would like to support cooperation in regard to credit transfers and degree acquisitions, etc. at Japanese and Russian universities with a view to boosting incentives for studying abroad, and that he intends to cooperate regarding exchanges of knowledge between the two countries, making use of the opportunity of the Japanese-Russia Forum of Rectors that would be held in Moscow in the near future. President Putin earnestly nodded.

(3) As for the “Japan-Russia Martial Arts Exchange Year,” in 2004 which was decided during Prime Minister Abe’s visit to Russia in April, President Putin statedhis desire that Russian martial art of sambo would prevail in Japan. Prime Minister Abe commented that he intends to make the year a fulfilling one by deeping mutual understanding bwtweek the people of the two countries through martial arts, which are a spiritual activity, with exchanges ofjudo, aikido, karate, and sambo, etc. He also mentioned that a visit by a delegate of Nippon Budokan scheduled for autumn 2014 would be a focus of attention, and he invited President Putin to its martial arts demonstration event.

(1) President Putin stated that the level of trade between Japan and Russia in the first half of this year has increased by 7.2%, adding that Japan’s total amount of investment in Russia has been increasing. He also commented in detail onthe progress of cooperation in various fields such as energy, transportation infrastructure, agriculture, and medical care.

(2) Prime Minister Abe referred to cooperation in the field of science and technology, suggesting instructions be given for the promotion of cooperation in a variety of fields, such as research on fast reactors, Arctic research, and space exploration following the visit to Russia by Minister Shimomura in August. President Putin concurred with Prime Minister Abe.

5. Issues related to the conclusion of a peace treaty

As for the conclusion of a peace treaty, the two leaders exchanged views concerning future negotiations based on the discussion at the summit meeting during the G20 Summit. In particular, Prime Minister Abe conveyed his notion that the next vice-ministerial level consultations on this issue should be held as soon as possible, and President Putin suggested holding discussions duringForeign Minister Lavrov’s visit to Japan in November.

Prime Minister Abe praised the initiatives of President Putin aimed at the international management of chemical weapons inSyria, and he welcomed the agreement between the United States and Russia and the adoption of a United Nations Security Council resolution. Furthermore, Prime Minister Abe stated that endingthe ongoing violence, promoting political dialogues, and improving the deteriorating humanitarian situation in Syria are pressing issues, and commented that he had announced additional humanitarian support in the amount of approximately 60 million dollars at the United Nations General Assembly. He added that Japan would cooperate and contribute as much as possible to the elimination of chemical weapons. Prime Minister Abe also stated that the holding of Geneva 2 will be very important, and that Japan is prepared to participate and make future contributions, andhe showed his willingness to continue communications between Japan and Russia on this issue. President Putin responded by praising the Japan’s role hoping to support from and collaboration with Japan.

Prime Minister Abe gave President Putin a birthday present at the end of the meeting.