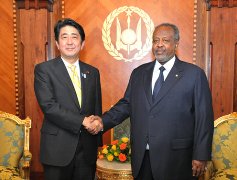 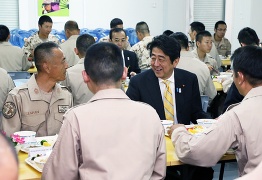 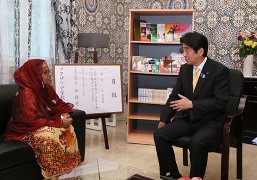 On Tuesday, 27 August, Mr. Shinzo Abe, the Prime Minister, visited the Republic of Djibouti. Major events, an overview and results of the visit are as follows:

(1) Visit to the Japan Self-Defense Force (JSDF) operational facility
(2) Meeting with H.E. Mr. Ismaïl Omar Guelleh, President of the Republic of Djibouti
(3) Courtesy call by Ms. Osman, principal of Fukuzawa Secondary School, and others concerned with Japan and Djibouti

(1) Visit to the JSDF operational facility

(2) Meeting with H.E. Mr. Ismaïl Omar Guelleh, President of the Republic of Djibouti

After his visit to the operational facility, Prime Minister Abe held a meeting with H.E. Mr. Ismaïl Omar Guelleh, President of the Republic of Djibouti, at the President’s office from 1:10 p.m. (local time) for approximately 50 minutes.

(i) General issues on economic cooperation
Prime Minister Abe stated that he was encouraged that Djibouti, a gateway to Africa, has been promoting infrastructure development, so that Djibouti can become an attractive country for the private sector. He also mentioned that the Japanese enterprises particularly value an unrestricted and safe investing environment and smooth mobilization of people and goods, and that the Government of Japan would continue its support to Djibouti. From this viewpoint, the Prime Minister also explained that the Government of Japan would steadily implement the commitments for Africa that he announced at TICAD V, such as private and public means of up to approx. JPY 3.2 trillion (equivalent to USD 32 billion), including ODA of approx. JPY 1.3 trillion (equivalent to USD 14 billion), in the next 5 years. In this regard, the Prime Minister also expressed his intention to continue supporting Djibouti as an important partner.
(ii) Electricity infrastructure
Prime Minister Abe announced a plan to implement studies for realization of geothermal power generation development through technical cooperation and for the project for improvement of electricity supply in the city of Djibouti from September this year. In response, the President expressed his gratitude.
(iii) Maritime security
To contribute to the improvement of maritime security capacities of Djibouti, Prime Minister Abe expressed its support in the field of maritime security such as implementation of study from September this year concerning supply of patrol vessels to the Coast Guard of Djibouti and dispatching of experts concerning maritime law enforcement for enhancing capabilities of the Coast Guard. In response to this, President Guelleh once again expressed his gratitude for Japan’s continuous support since the independence of Djibouti.

(3) Courtesy call by Ms. Osman, principal of Fukuzawa Secondary School, and others concerned with Japan and Djibouti