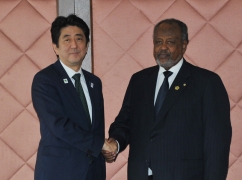 (Photo: Cabinet Public Relations Office)
On June 1, for about 20 minutes from 12:30 pm, Prime Minister Shinzo Abe had a meeting with H. E. Mr. Ismaïl Omar Guelleh, President of the Republic of Djibouti in Yokohama, Japan. The following is the gist of the meeting. President Guelleh is visiting Japan to participate in the Fifth Tokyo International Conference on African Development (TICAD V) held from June 1 to 3.

1. At the beginning of the meeting, Prime Minister Abe welcomed President Guelleh’s visit all the way to Japan, which marks his third participation at TICAD meetings. Prime Minister Abe expressed his intention to cooperate with President Guelleh to bring TICAD V to a success. In response, President Guelleh congratulated the 20th anniversary of TICAD. He said that Japan extended high-quality support to Africa through the TICAD process and that the presence of many heads of state this day proves for the cooperation, friendship and solidarity between Africa and Japan. He also mentioned that he is aware that as a result of the economic policies launched by Prime Minister Abe since he took his office, the Japanese economy has become reinvigorated.

2. President Guelleh said that the cooperation between the two countries in the political, economic and other areas stands at the highest level. He also expressed his gratitude to Japan for its assistance and stated that Djibouti is pleased to receive units of the Japan Self-Defense Forces which are conducting anti-piracy operations from Djibouti. Explaining that Djibouti needs to develop geothermal and other forms of power generation as well as to improve infrastructure in the area of transport, traffic, finance and trade for its own development, President Guelleh expressed his expectation for Japanese investment in his country.

3. Prime Minister Abe said that Japan feels grateful for Djibouti’s cooperation toward anti-piracy operations conducted by Japan’s Self-Defense Forces and others, and also requested to continue the cooperation. He further mentioned that Japan continues to support the development of Djibouti as a strategically important partner for Japan, while mentioning that Japan has implemented grant aid projects for the provision of equipments for waste disposal and for fire-fighting since the end of last year. He added that Japan is also interested in developing geothermal power generation in Djibouti.

4. The two leaders exchanged opinions concerning cooperation in the international arena, including the development of Africa.