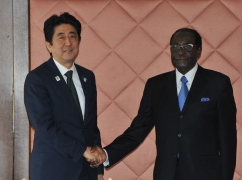 (Photo: Cabinet Public Relations Office)
On June 1, for 20 minutes from 11:05 am, Japanese Prime Minister Shinzo Abe had a Japan-Zimbabwe Summit Meeting in Yokohama with H.E. Mr. Robert Mugabe, President of the Republic of Zimbabwe. The following is the gist of the meeting. President Mugabe is visiting Japan to participate in the Fifth Tokyo International Conference on African Development (TICAD V) currently held from June 1 through 3.

2. Prime Minister Abe said that Japan has decided to conduct a new preparatory survey concerning irrigation improvement and plans to dispatch advisors for aid coordination, for the full-scale resumption of bilateral economic cooperation. He expressed his expectation that these support would contribute to the stabilization of political and economic situation in Zimbabwe. Prime Minister Abe said that he appreciates the steady progress of the roadmap to general election in Zimbabwe and continues to place hopes on President Mugabe’s leadership. President Mugabe replied that supports would be necessary to implement elections in fair environment and showed his gratitude for the preparatory survey on irrigation improvement and food aid.

3. In addition, both leaders exchanged opinions concerning cooperation in the international arena including the development of Africa.