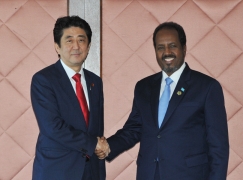 (Photo: Cabinet Public Relations Office)
On May 31, for 15 minutes from 12:20 pm, Prime Minister Shinzo Abe held a summit meeting with H.E. Mr. Hassan Sheikh Mohamud，President of the Federal Republic of Somalia. The following is the gist of the meeting. President Mohamud is visiting Japan to participate in the Fifth Tokyo International Conference on African Development (TICAD V) held in Yokohama from June 1 to 3.

1. At the beginning of the meeting, Prime Minister Abe said he was delighted to have the first Japan-Somalia summit meeting in the history, expressing a hope to strengthen bilateral relationships resumed for the first time in 21 years. Prime Minister Abe also expressed his hope for development both in Africa and Japan at the TICAD V, held in the year which marks the 50th anniversary of the African Union (AU) and the 20th anniversary of the TICAD process.

3. Prime Minister Abe expressed a willingness to support Somalia’s efforts, saying that the stability and development of Somalia is vital to the prosperity of the region as well as the international community. Prime Minister Abe also stated that, from this perspective, the Japanese government had decided to provide 55.4 million dollars in assistance, including the support for the Somali Police Force. Prime Minister Abe further communicated a decision to resume bilateral direct assistance to Somalia, expressing a hope to advance preparations for inviting senior officials of the Somali government to Japan for trainings.

4. In response, President Mohamud showed his firm determination to step up efforts for the achievement of peace and stability in Somalia, expressing his sincere gratitude for the bilateral assistance of Japan to Somalia.

5. In addition, they exchanged opinions concerning cooperation in the international arena, including the development in Africa.