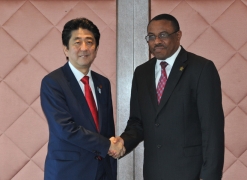 (Photo: Cabinet Public Relations Office)
On May 31, for about 15 minutes from 11:00 am, Prime Minister Shinzo Abe had a summit meeting with H. E. Mr. Hailemariam Desalegn, Prime Minister of Federal Democratic Republic of Ethiopia in Yokohama, Japan. The following is the gist of the meeting. Prime Minister Hailemariam is visiting Japan to participate in the Fifth Tokyo International Conference on African Development (TICAD V) held from tomorrow, June 1 to 3.

2. Next, Prime Minister Hailemariam expressed appreciation for the support from Japan, especially human resources development as well as trainings in such areas as water and infrastructure. Prime Minister Hailemariam added that both public and private sectors in Ethiopia are implementing “Kaizen” to improve productivity, hoping it would lead to an increase in the investment from Japan; such investment is particularly important in the areas of agriculture and light manufacturing industry. Prime Minister Hailemariam said he believed that the value system of the Japanese people is important for Ethiopia as well, expressing a will to learn a lot from work ethics in Japan. He again showed appreciation for the support provided by Japan.

3. Prime Minister Abe expressed his hopes to continue cooperation with Ethiopia to help the region, including Somalia, achieve peace and stability. He continued that the Japanese government would carry out studies of specific projects with the aim of resuming yen loans to Ethiopia and would help Ethiopia drive development, specifically for improvement of rural water supply and road. Referring to climate resilience initiatives, he mentioned that Japan would like to work closely to implement a Joint Crediting Mechanism for its full-fledge operation based on the bilateral document signed by the two nations. Furthermore, Prime Minister Abe expressed a hope that business seminars scheduled during the term of this TICAD V would attract attention of Japanese firms to Ethiopia and the Japanese government would cooperate to the extent possible.

4. In addition, the two leaders exchanged opinions concerning cooperation in the international arena, including the development of Africa.