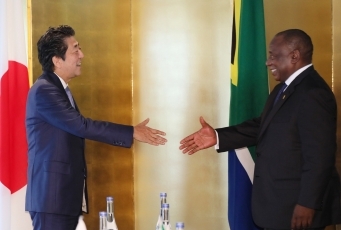 Photo: Cabinet Public Relations Office
On August 28, for about 25 minutes, from 2:16 p.m., Prime Minister Shinzo Abe held a summit meeting with H.E. Mr. Cyril Ramaphosa, President of the Republic of South Africa, in Yokohama, Japan. The overview of the meeting is as follows. President Ramaphosa is visiting Japan to participate in the Seventh Tokyo International Conference on African Development (TICAD7) held from August 28 to 30.

1. At the outset, Prime Minister Abe stated, “Thank you President Ramaphosa for visiting Japan again following Your Excellency’s visit to the G20 Summit. South Africa, as a major African economy, will play a significant role in TICAD7, which aims to promote business. We have great hopes in your leadership.” In addition, Prime Minister Abe said, “I welcome the South African team coming to Japan next month to participate in the Rugby World Cup Japan. A test match between Japan and South Africa is scheduled. I wondered why the Japanese team had chosen strong South African team as an opponent, but I wish both teams best of luck and finish the game safe and sound.” In response, President Ramaphosa stated, “Thank you for the invitation to TICAD7 and for providing an opportunity for African countries to come to Japan to discuss the development of Africa,” and highly evaluated activities of Science and Technology in Society forum (STS Forum).

2. Following that, Prime Minister Abe added that the Japan-South Africa Business Council (tentative name) should be established to support Japanese companies entering the South African market in order to further enhance trade and investment relations between the two countries. He also mentioned the holding of the Special Conference on Promoting Cooperation in the Western Indian Ocean and stated that Japan intended to cooperate with South Africa to ensure that the Indian Ocean develops as a free and open ocean. Prime Minister Abe further called for South Africa’s participation in the “Osaka Track” that promotes international rule making for data distribution and electronic commerce and its support for WTO reform. In response, President Ramaphosa welcomed the establishment of the Japan-South Africa Business Council and appreciated Japan’s supports related to the establishments of a universal health insurance system as well as the Universal Health Coverage (UHC), to measures against marine plastic litter, to industrial human resources development, and to some other areas.

3. The two leaders also exchanged views regarding cooperation in the international arena, including UN Security Council reform, and the North Korea situation.