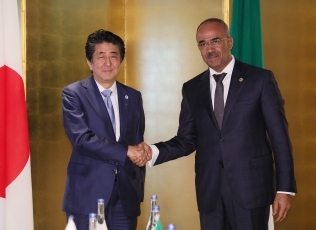 Photo: Cabinet Public Relations Office
Mr. Shinzo ABE, Prime Minister, held a Summit Meeting in Yokohama with H.E. Mr. Noureddine Bedoui, Prime Minister of People’s Democratic Republic of Algeria, who is visiting Japan to attend the seventh Tokyo International Conference on Africa Development (TICAD7), commencing at 5:05 p.m. on August 28 for approximately 10 minutes. The overview of the meeting is as follows.

At the outset, Prime Minister Abe stated that “Algeria’s stability is directly linked to the stability of the region” and that “we hope political reforms and dialogue will be implemented based on the will of Algerian people”.

Prime Minister Abe also stated that “Japan would like to contribute to the economic diversification that Algeria is aiming for, and ask Algeria to provide support for Japanese companies upon establishing their business, such as automobile production, in Algeria. In response, Prime Minister Mr. Bedoui expressed his hopes for more investment from Japanese businesses and his intention to support Japanese companies.

The two leaders also exchanged views regarding cooperation in the international arena, including UN Security Council reform as well as and North Korea and Libya situation.

Page Top
Back to Japan-Algeria Relations