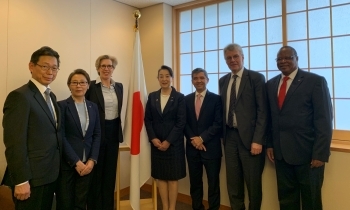 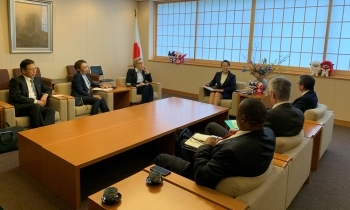 On February 17, commencing at 9:25 A.M. for approximately 25 minutes, Ms. Asako Omi, Parliamentary Vice-Minister for Foreign Affairs, received a courtesy call by five Governors (Mongolia, Germany, Sweden, Paraguay, South Africa) of the IAEA. The overview of the meeting is as follows:

1. In the beginning, Ms. Omi stated that Japan would render its assistance to the fullest extent to the endeavor of Director General Grossi and continue to work on strengthening the activities of the IAEA in cooperation with other IAEA Member States.

2. In addition, Ms. Omi explained Japan’s response to the Nuclear Power Station accident at TEPCO’s Fukushima Daiichi and expressed her hope that the Governors would be able to deepen their understandings on Japan’s activities related to nuclear energy through their visits to the Nuclear Power Station and so on. Ms. Omi also stressed that Japan would continue to provide its strong support to the efforts made by the IAEA to deal with the nuclear issues of North Korea and to promote peaceful uses of nuclear energy.

3. In response, the Governors expressed their gratitude for the kind invitation from the Government of Japan stating that they would like to deepen their knowledge on Japan’s efforts in areas such as nuclear non-proliferation and peaceful uses of nuclear energy as well as further strengthen their cooperation with Japan which greatly contributes to the activities of the IAEA.