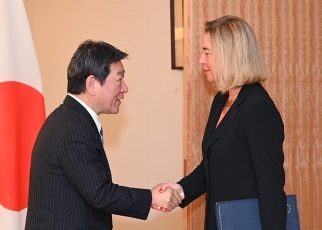 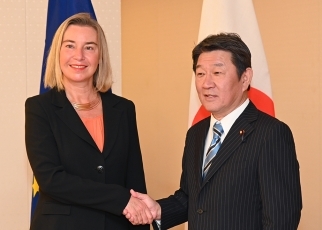 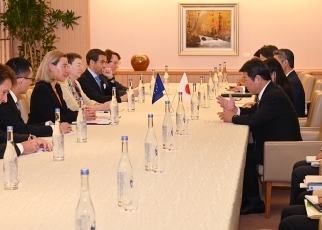 On October 21, commencing at 10:30 a.m. for approximately 20 minutes, Mr. MOTEGI Toshimitsu, Minister for Foreign Affairs of Japan, held a meeting with H.E. Ms. Federica Mogherini, High Representative of the European Union for Foreign Affairs and Security Policy, Vice-President of the European Commission, who was visiting Japan. The overview of the meeting is as follows.

1. Opening remarks
Minister Motegi welcomed High Representative Mogherini’s visit to Japan and stated, “I would like to express my gratitude to your kind joint condolence message to the Typhoon Hagibis (Typhoon No. 19) damages. I would like to thank you for your leadership which has developed Japan-EU relations significantly.” In response, High Representative Mogherini expressed her honour to attend, on behalf of the EU, the historic occasion of the Ceremony of the Enthronement of His Majesty the Emperor, offered her deep condolences for the damages caused by Typhoon Hagibis, and stated that Japan and the EU enjoy very close relations.

2. Japan-EU relations
Minister Motegi stated, “‘The Europa Connectivity Forum’, attended by Prime Minister Abe last month, represents one of the tangible joint works under the Japan-EU SPA (Strategic Partnership Agreement). I welcome that Japan and the EU have confirmed the Japan-EU cooperation in terms of the connectivity in the areas including the Indo-Pacific.” “The Japan-EU Connectivity Partnership document signed by the both leaders covers not only infrastructure development, but also other wide-ranging areas, including digital, energy, and education and research. I hope to deliver concrete outcomes.”, “I hope to build close relations for further strengthening Japan-EU relations with the new leadership of the EU including Spanish Foreign Minister Borrell, High Representative-designate.” Regarding the UK’s withdrawal from the EU, Minister Motegi stated, “Japan welcomes the new agreement between the UK and the EU. Japan keeps a cautious and close watch on the future process and strongly hopes that confusions caused by ‘no-deal Brexit’ will be avoided”. In response, High Representative Mogherini stated that “the Europa Connectivity Forum” provided an excellent opportunity for confirming the importance of the connectivity between Europe and Asia, it would be important to implement cooperation in the connectivity field, we would like to work together with Japan based on the connectivity partnership by prioritizing some areas, and the partnership with Japan could be a model for the EU to promote the connectivity with other partners”.

3. Regional situations
They exchanged views regarding the regional situations, including North Korean affairs. They shared the view that they could not overlook the missile launches by North Korea, reconfirmed the necessity of the full implementation of the United Nations Security Council resolution, and cooperated to resolve matters including the abduction issue.