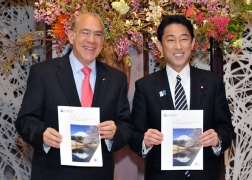 On April 22, from 7:40 P.M., Mr. Fumio Kishida, Minister for Foreign Affairs of Japan, held a dinner meeting at Iikura Guest House with Mr. José Ángel Gurría Treviño, Secretary General of the OECD, who is visiting Japan. An overview of the dinner meeting is as follows.