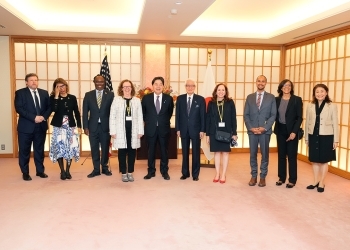 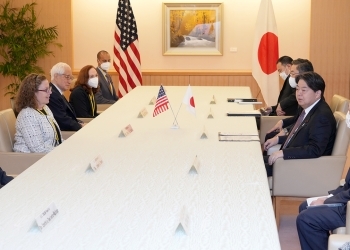 On October 26, commencing at 03:00 p.m. for approximately 15 minutes, Foreign Minister HAYASHI Yoshimasa received a courtesy call by Dr. Sheila SMITH, the U.S. Chair of the United States-Japan Conference on Cultural and Educational Interchange (CULCON), Ambassador KATO Ryozo, Japan Chair of CULCON and the former Japanese Ambassador to the United States, and other U.S. CULCON panelists. The overview of the courtesy call is as follows.

Note 1: CULCON was established in June 1961 based on a joint statement by Prime Minister IKEDA Hayato and President John F. KENNEDY. Expert panels from Japan and the United States make proposals and recommendations to both governments regarding cultural and educational exchanges between the two countries. Its first meeting was held in Tokyo in January 1962. Since then, conferences have been held biannually in principle, in Japan and the U.S alternatively.

Note 2: CULCON holds a symposium in the year when the conference is not held, and in 2022 the symposium was held on October 24 at the Kyushu National Museum with the theme of "Mutual Understanding between the U.S. and Japan”.