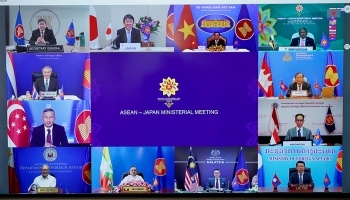 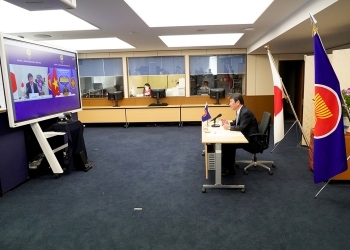 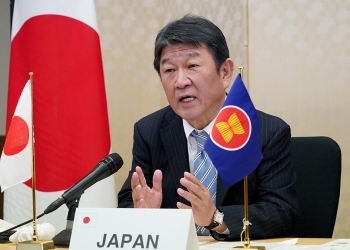 On August 3, commencing at 3:30 p.m. for one and a half hours, the Japan-ASEAN Ministerial Meeting was held in an online format. Mr. MOTEGI Toshimitsu, Minister for Foreign Affairs of Japan, attended from Japan and co-chaired the meeting alongside H.E. Mr. Bui Thanh Son, Minister of Foreign Affairs of the Socialist Republic of Viet Nam. The overview of the meeting, focusing on Minister Motegi’s statements, is as follows.

In his opening remarks, Minister Son welcomed the steady progress achieved in Japan-ASEAN relations over the past three years, during which Viet Nam served as ASEAN Country Coordinator for Japan, and expressed his intention to further deepen the strategic partnership between Japan and ASEAN.

In response, Minister Motegi offered his congratulations for the achievements of the athletes representing the ASEAN countries and expressed his hope that they will continue to perform at the highest level. Minister Motegi then extended his sympathies to that the many have been infected by COVID-19 in ASEAN countries, and stated that Japan, as a true friend of ASEAN, intends to overcome this crisis together with ASEAN, through the provision of healthcare and medical support, vaccines, and assistance to the ASEAN Comprehensive Recovery Framework, among other initiatives. Furthermore, he stated that, precisely in such a crisis posed by COVID-19, it is important to maintain and strengthen the principles of rule of law, openness, transparency, and inclusivity in the Indo-Pacific region, and that Japan supports the ASEAN Outlook on the Indo-Pacific (AOIP) issued by ASEAN, a cornerstone for the realization of a “free and open Indo-Pacific”, and Japan will not hesitate to extend concrete cooperation to advance the AOIP. In addition, Minister Motegi expressed his intention to strengthen cooperation towards the stabilization of the Sulu and Celebes Seas and surrounding areas.

Minister Motegi also touched upon the upcoming 50th anniversary of ASEAN-Japan Friendship and Cooperation in 2023, expressing his intention to welcome the leaders of each ASEAN country to Japan on the occasion of the 50th anniversary, hold a special summit meeting, and bring Japan-ASEAN relations to a new stage.

2. Review of Japan-ASEAN Cooperation and Future Direction, and the Regional Situation

Minister Motegi stated that access to vaccines should not be influenced by a country’s situation or economic strength, that Japan has contributed to ensuring equitable access to vaccines, including in developing countries, through the provision of funding to the COVAX facility, among other efforts, and that Japan has provided approximately 9.6 million doses of vaccines manufactured in Japan to ASEAN to date and will positively consider continuing to do so. Minister Motegi also stated that Japan has provided approximately 2.5 billion yen in assistance to ASEAN in the form of “Last One Mile Support” aimed at providing cold chain equipment needed to deliver vaccines all the way to vaccination sites, in addition to medical supplies and technical cooperation that Japan has provided as measures against COVID-19, and that Japan has very recently decided to provide oxygen concentrators to those ASEAN countries where infections are rapidly spreading. He then expressed Japan’s intention to continue to lead international initiatives to realize equitable access to vaccines and provide its full support for ASEAN countries.

In response, the ASEAN countries expressed their great appreciation and gratitude towards Japan’s support for efforts to combat COVID-19, including the provision of vaccines.

3. The Regional and International Situation

Minister Motegi stated that unilateral attempts to change the status quo by force in the East and South China Seas are continuing and intensifying, and expressed his strong opposition. Minister Motegi also mentioned that he has issued a statement concerning the passing of five years since the issuance of the Arbitral Tribunal’s award as to the disputes between the Republic of the Philippines and the People’s Republic of China, emphasized the importance of the rule of law and the peaceful settlement of disputes in the South China Sea, and stated that the parties should comply with the award. Furthermore, Minister Motegi stated that the Code of Conduct (COC) should be consistent with the United Nations Convention on the Law of the Sea (UNCLOS) and should not prejudice the legitimate rights and interests of all stakeholders.

Minister Motegi stated that the full implementation of the United Nations Security Councilresolutions (UNSCRs) is critical towards achieving the complete, verifiable and irreversible dismantlement of all of North Korea’s weapons of mass destruction and ballistic missiles of all ranges, and asked for continued understanding and cooperation in relation to the abductions issue.

The ASEAN countries stated the importance of the denuclearization of the Korean Peninsula and the full implementation of the UNSCRs. They also expressed their support for the resolution of the abductions issue.

The ASEAN countries made statements expressing their intention to cooperate with the swift implementation of the Five-Point Consensus on the situation in Myanmar and noted the importance of humanitarian support for the people of Myanmar.

Minister Motegi stated that Japan will continue to provide full support to the ASEAN Centre for Public Health Emergencies and Emerging Diseases to develop the Centre into a hub for the region’s fight against infectious diseases into the future and protect the people of ASEAN from the threat posed by infectious diseases.

In response, ASEAN member state expressed their appreciation towards Japan’s support for the Centre.

Lastly, Minister Motegi expressed his gratitude to the ASEAN countries for their support for the holding of a special summit meeting in 2023, and his intention to work closely with the ASEAN side to turn it into an opportunity to bring the Japan-ASEAN strategic partnership to a new stage. The ASEAN side reiterated its congratulations for the holding of the Tokyo Olympic Games and its high appreciation for Japan’s extensive efforts, and made statements wishing for the success of the Games.