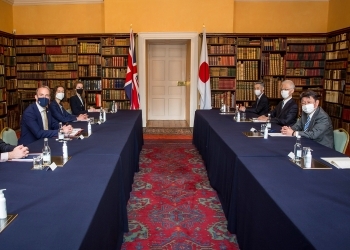 On May 3, commencing at 10:35 a.m. (local time: on May 3 at 6:35 p.m. Japan time), Mr. MOTEGI Toshimitsu, Minister for Foreign Affairs of Japan, who is currently visiting the United Kingdom (UK), held the Japan-UK Foreign Ministers’ Strategic Dialogue with the Rt Hon Dominic Raab MP, Secretary of State for Foreign, Commonwealth and Development Affairs and First Secretary of State of the United Kingdom, at Chevening House, the residence of the UK Foreign Secretary (located in Kent) for a total of two hours and thirty minutes. The overview of the Dialogue is as follows.