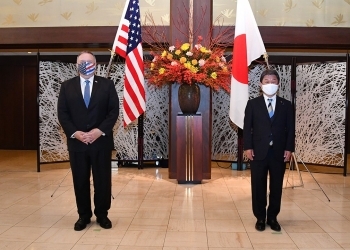 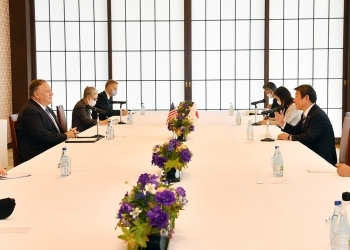 On October 6, commencing around 11:00 a.m. for approximately 70 minutes, Mr. MOTEGI Toshimitsu, Minister for Foreign Affairs of Japan, held a Foreign Ministers’ Meeting over lunch with the Honorable Mike Pompeo, Secretary of State of the United States of America. The overview of the meeting is as follows.

1. At the outset, Minister Motegi wholeheartedly welcomed Secretary Pompeo’s visits for three consecutive years, and conveyed his best wishes to President Trump and Madam First Lady, who were infected with COVID-19, and prayed for their early recovery. In response, Secretary Pompeo expressed his gratitude for Minister Motegi’s words of sympathy, and stated that he would convey them to the President and Madam First Lady. In addition, he stated that the Japan-U.S. alliance plays a pivotal role in maintaining the peace and stability of the Indo-Pacific region, and that he would like to further strengthen the robust Japan-U.S. alliance. Moreover, the two ministers shared the view to continue strengthening the Japan-U.S. alliance, which is the cornerstone of peace and stability in the region and the international community, under the Suga administration.

2. Bearing in mind the discussions in the quad meeting to be held on the same day, the two ministers reaffirmed that continuing coordination among like minded countries including Japan and the U.S. is important for realizing a free and open Indo-Pacific.

3. The two ministers exchanged views on the situations in the East China Sea, the South China Sea, and North Korea. Regarding the situation in North Korea, Minister Motegi stated that the abductions issue is a top priority for the Suga administration, and the two ministers shared the view to continue to closely coordinate towards the resolution of the abductions, nuclear, and missile issues.

4. Regarding cyber security, Secretary Pompeo shared the measures taken by the U.S., and Minister Motegi stated that Japan would like to deepen cooperation with the U.S. in this area, and that Japan supports the basic concept of the 5G Clean Path Initiative on securing safe communication between diplomatic facilities.

5. The two ministers confirmed that they would strengthen cooperation on development of and fair access to COVID-19 vaccine, while working with like-minded countries.