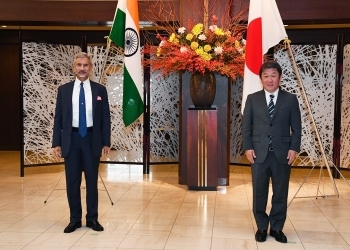 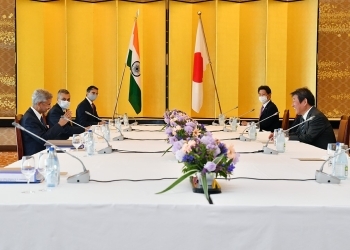 On October 7, commencing at around 12:30 p.m. for approximately 75 minutes, Mr. MOTEGI Toshimitsu, Minister for Foreign Affairs of Japan, held a Japan-India Foreign Ministers’ Strategic Dialogue with H.E. Dr. S. Jaishankar, External Affairs Minister of India, who is visiting Japan to attend the Japan-Australia-India-U.S. Foreign Ministers’ Meeting. The overview of the dialogue is as follows.

2. Bilateral relations
The Ministers exchanged views on wide-ranging topics, including politics and security as well as economy and economic cooperation. Referring to the signing of exchanges of notes in late August for Japan’s COVID-19 measures for India, namely a 50 billion yen emergency assistance loan and a 1 billion yen grant aid for the provision of medical equipment, Minister Motegi expressed his hope that this assistance will contribute to developing the health and medical systems of India, including the COVID-19 response. In response, Minister Jaishankar expressed his appreciation.
The Ministers reaffirmed the importance of implementing Japan-India cooperation in third countries such as ASEAN and Southwest Asian countries and making steady progress on the high-speed rail project.

3. Regional and international situations
The Ministers exchanged a range of views regarding cooperation for realizing a “Free and Open Indo-Pacific” and affirmed their intention to continue boosting the bilateral cooperation, including the Indo-Pacific Oceans Initiative promoted by India.
The Ministers exchanged opinions regarding the issue of North Korea. Minister Motegi asked for understanding and cooperation towards the early resolution of the abductions issue and Minister Jaishankar expressed his support.
Minister Motegi congratulated India on its election as a non-permanent member of the United Nations Security Council (UNSC). The Ministers affirmed that the two countries will cooperate toward realizing UNSC reforms as early as possible.