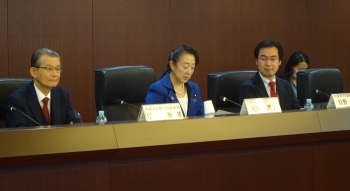 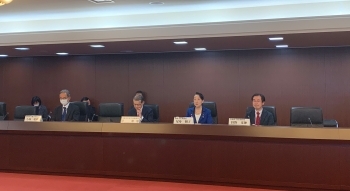 1. On March 19th, with the participation of Ms. OMI Asako, Parliamentary Vice-Minister for Foreign Affairs, and Dr. KISHI Teruo, Science and Technology Advisor to the Minister for Foreign Affairs of Japan, the 12th Meeting of the Advisory Board for the Promotion of Science and Technology Diplomacy was held.
At the beginning, Ms. OMI expressed gratitude to Dr. KISHI and the Advisory Board for their crucial contributions, highlighting the importance and the role of science and technology in diplomacy and international cooperation. Ms. OMI also reviewed the 2nd Symposium on Science and Technology Diplomacy co-hosted by Ministry of Foreign Affairs of Japan and National Graduate Institute for Policy Studies (GRIPS) on December 11th. Ms. OMI expressed that the symposium put forward useful insights on charting future direction to strengthen and further develop science and technology advisory framework in Japan’s diplomacy, building upon the activities by Dr. KISHI.

2. Dr. KISHI reviewed his activities since the 11th meeting such as PR activities regarding Japan’s STI initiatives and networking. Besides, Dr. KISHI requested the Advisory Board for their continuous support as the role of science and technology in diplomacy has become increasingly important.

4. Reflecting upon the above-mentioned reports, the members had an active discussion on issues and necessary actions from the viewpoint of further advancing science and technology diplomacy.