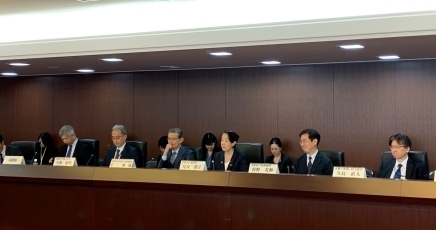 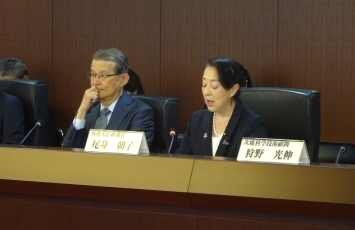 1. At the beginning, Ms. OMI expressed gratitude to Dr. KISHI, and the Advisory Board for their crucial contributions to the important diplomatic event, the Seventh Tokyo International Conference on African Development (TICAD7). Ms. OMI recognized that the Advisory Board submitted their recommendations of “Achieving an innovative ecosystem together with Africa” as an input to TICAD7, which were reflected in its outcome document. She also stated that based on the Advisory Board’s recommendations, research proposals to solve social issues by actively utilizing Information and Communication Technology (ICT) in the African region would be encouraged under the program of Science and Technology Research Partnership for Sustainable Development (SATREPS) in FY2020. Besides, Ms. OMI announced that the 2nd Symposium on Science and Technology Diplomacy was to be held on December 11th, highlighting Dr. KISHI's activities and contributions as the Science and Technology Advisor and discussing the future of Japan's science and technology diplomacy as well as the role of the Science and Technology Advisor in Japan.

2. Dr. KISHI reported his activities since the 10th meeting such as PR activities regarding Japan’s STI initiatives and networking. In addition, Dr. KISHI asked the Advisory Board members and relevant parties for their continuous support to his activities to advance Japan’s science and technology diplomacy.

4. Reflecting upon the above-mentioned reports, the members had an active discussion on issues and necessary activities from the viewpoint of further advancing science and technology diplomacy.

Reference 1: SATREPS (Science and Technology Research Partnership for Sustainable Development)
Reference 1: SATREPS is a joint research program in which researchers from developing countries and Japan collaborate for 3-5 years. It is conducted under the coordination among Japan Science Technology Agency (JST), Japan Agency for Medical Research and Development (AMED) and Japan International Cooperation Agency (JICA) with the following objectives; 1) enhancing international science and technology cooperation between Japan and developing countries, 2) acquisition of new knowledge and technology that can contribute to resolving global issues and advancing science and technology standard, and 3) capacity development.