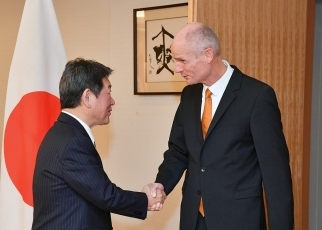 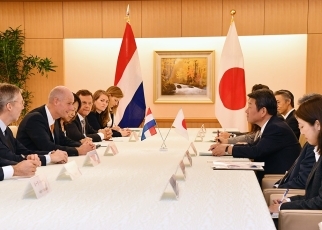 On November 22, commencing at 9:00 a.m. for approximately 30 minutes, Mr. MOTEGI Toshimitsu, Minister for Foreign Affairs of Japan, held a Foreign Ministers’ Meeting with H.E. Mr. Stef BLOK, Minister of Foreign Affairs of the Kingdom of the Netherlands, who is visiting Japan to attend the G20 Aichi-Nagoya Foreign Ministers’ Meeting. The overview of the meeting is as follows.

1. Minister Motegi stated ”I welcome the visit of Minister Blok. Japan would like to promote cooperation with the Netherlands as a strategic partner in a wide range of areas including the rule of law, disarmament and non-proliferation, cybersecurity and the UN Security Council reform. In response, Minister Blok stated “I am pleased to be back in Japan and that our two countries have a long and storied history.” He continued that “many Japanese companies have headquarters in the Netherlands and many Dutch companies are operating in Japan, and I had a meeting with them this morning.” Minister Blok noted that “our countries are also working together in international organizations and I would like to strengthen cooperation with Japan.” Both Ministers also welcomed the prospect of introducing a Working Holiday Program between Japan and the Netherlands.

2. The Ministers exchanged views on bilateral relations, including the Japan-Netherlands Peace Exchange Program, and agreed to the importance of focusing on the future as they continue to strengthen the relationship, further promoting close, bilateral cooperation in a wide range of areas, as well as solidifying the relationship between Japan and EU, which share common values, on various challenges.

3. The Ministers exchanged views on other regional situations. The Ministers confirmed further close cooperation towards the complete CVID of North Korea. Minister Motegi asked for Minister Blok's understanding and his cooperation on finding an immediate resolution of the abductions issue. In response, Minister Blok expressed his support.