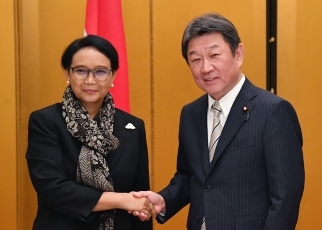 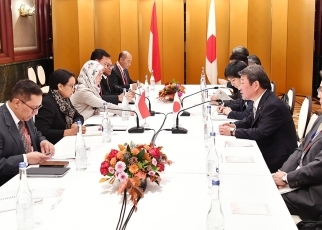 On Friday, November 22, commencing at 5:25 p.m. for approximately 25 minutes, Mr. MOTEGI Toshimitsu, Minister for Foreign Affairs of Japan, held a Foreign Ministers’ Meeting with H.E. Ms. Retno L.P. Marsudi, Minister for Foreign Affairs of the Republic of Indonesia, who is visiting Japan to attend the G20 Aichi-Nagoya Foreign Ministers’ Meeting. The overview of the meeting is as follows.

2. The Ministers exchanged views on people-to-people exchange including receiving human resources from Indonesia.

3. The Ministers shared the view that they will cooperate toward resuming the project for collecting the remains of Japanese soldiers who died in Indonesia, as was confirmed at the recent summit meeting. In addition, Minister Motegi asked for an early removal of Indonesia’s import restrictions on Japanese food products.

4. The Ministers also exchanged views and confirmed cooperation regarding the regional situation, such as the South China Sea issue. Minister Motegi stated that Japan supports the ASEAN Outlook on the Indo-Pacific [AOIP], and Minister Retno welcomed Japan’s support. Minister Motegi stated that Japan will steadily extend supports for the development of Indonesia’s remote islands and technical cooperation for the Indonesia National Coast Guard (BAKAMLA), as well as enhance cooperation in the maritime field.