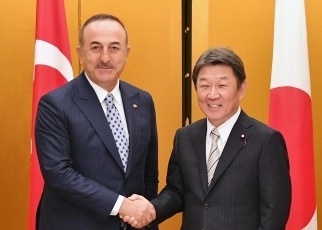 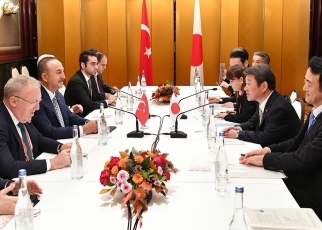 On November 22, commencing at 2:50 p.m. for approximately 25 minutes, Mr. MOTEGI Toshimitsu, Minister for Foreign Affairs of Japan, held a meeting with H.E. Mr. Mevlüt Çavuşoğlu, Minister of Foreign Affairs of the Republic of Turkey, who is visiting Japan to attend the G20 Aichi-Nagoya Foreign Ministers’ Meeting. The overview of the meeting is as follows.

1. Opening remarks
Minister Motegi welcomed Minister Çavuşoğlu to Japan and congratulated the Minister on receiving the Grand Cordon of the Order of the Rising Sun at the 2019 Spring Conferment of Decoration on Foreign Nationals. In response, Minister Çavuşoğlu expressed his gratitude for receiving the Decoration and stated that he would like to continue to make his efforts in strengthening the bilateral relationship.

2. Bilateral relations
The Ministers confirmed that the two countries will continue their cooperation on the Japan-Turkey Economic Partnership Agreement (EPA) toward the early conclusion of the negotiation. In addition, the Ministers shared the view that they will continue to cooperate on further deepening their wide-ranging bilateral relationship, including in the areas of education and disaster risk reduction.