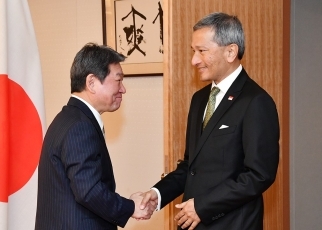 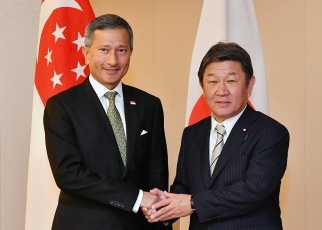 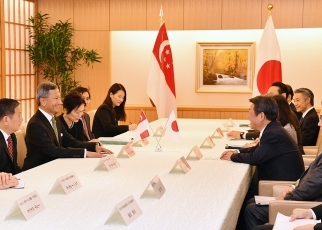 1. On November 22, commencing at 9:35 a.m. for approximately 25 minutes, Mr. MOTEGI Toshimitsu, Minister for Foreign Affairs of Japan, held a Foreign Ministers’ Meeting with H.E. Dr. Vivian Balakrishnan, Minister for Foreign Affairs of the Republic of Singapore, who is visiting Japan to attend the G20 Aichi-Nagoya Foreign Ministers’ Meeting. The overview of the meeting is as follows.

2. Minister Motegi stated, “Japan welcomed Prime Minister Lee’s announcement of the lifting of its outstanding import restrictions on food from Fukushima on the occasion of ASEAN-related summit meetings. It has been taken as the encouraging news for the people working on reconstruction in Japan.” In response, Minister Balakrishnan stated, “Prime Minister Lee has announced the lifting of its import restrictions taking into account the confidence for safeguards that Japan has implemented on the food.”

3. In addition, regarding the bilateral relationship, Minister Motegi stated, “Singapore is an important partner for Japan which shares common fundamental interests and views, and Japan intends to continue to further evolve the Japan-Singapore Partnership Programme for the 21st Century (JSPP21), which symbolizes Japan-Singapore cooperation.”

4. The Ministers exchanged views on promoting free trade, one of the themes of the G20 Foreign Ministers’ Meeting. The Ministers shared the view that they will cooperate toward the early conclusion of the RCEP. In addition, Minister Balakrishnan stated, “We show respect to your strong leadership on the TPP11, RCEP and Trade Agreement between Japan and the United States of America.”

5. The Ministers discussed and confirmed cooperation regarding regional issues, including the South China Sea and North Korea. Minister Motegi asked Minister Balakrishnan for his understanding and cooperation toward the early resolution of the abductions issues.