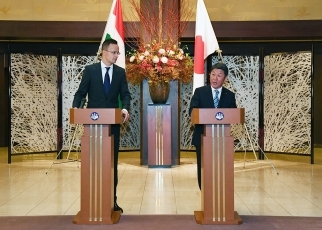 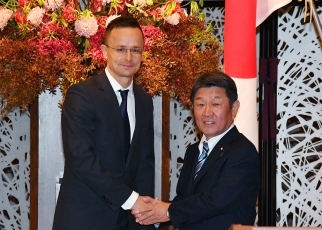 On November 6, commencing at 6:55 p.m. for approximately 70 minutes, Mr. MOTEGI Toshimitsu, Minister for Foreign Affairs of Japan, held a Foreign Ministers’ Meeting (working dinner) with H.E. Mr. Péter Szijjártó, Minister of Foreign Affairs and Trade of Hungary, who is visiting Japan, in Tokyo. The overview of the meeting is as follows.

1. Opening Remarks
Minister Motegi welcomed Minister Szijjártó to Japan, stating that this year, which marks the 150th anniversary of establishment of Japan-Hungary diplomatic relations, has been a fruitful year with a series of reciprocal visits taking place at the high level, including the visit to Hungary by Her Imperial Highness Princess Kako and the visit to Japan by President Áder and his spouse Mrs. Herczegh Áder for the Ceremony of the Enthronement of His Majesty the Emperor. In response, Minister Szijjártó offered words of condolence for damage caused by Typhoon Hagibis, and reiterated his gratitude for the warm hospitality he received on occasion of this visit to Japan.

2. Japan-Hungary relations<
Minister Motegi stated that various events were being held in both Japan and Hungary which marks the 150th anniversary of establishment of Japan-Hungary diplomatic relations. Minister Motegi also told that he is pleased that exchanges between the two countries such as Host Town exchange are deepening toward the 2020 Tokyo Olympic and Paralympic Games. In response, Minister Szijjártó expressed his gratitude to the support of Host Towns to atheletes of Hungary, such as Tochigi Prefecture. Minister Szijjártó also expressed his intention to seize the opportunity of the 150th anniversary to strengthen bilateral relations with Japan in a wide range of fields, including politics, economy, culture and education.

Additionally, Minister Szijjártó referred to the importance of investment from Japan to Hungary. The Ministers shared the view to further strengthen economic relations between the two countries.

4. Regional and international situation
The Ministers exchanged views regarding the situation in East Asia, including North Korean issue. The Ministers shared the view to continue to closely cooperate towards denuclearization of North Korea. In addition, Minister Motegi asked for understanding and cooperation of Minister Szijjártó on the prompt resolution of the abductions issue, and gained his support.

(Note) V4 (Visegrad Group 4)
A regional cooperation framework consisting of the Czech Republic, Hungary, Poland, and Slovakia. The group was founded in Visegrad in Hungary in 1991.