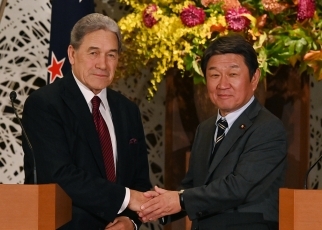 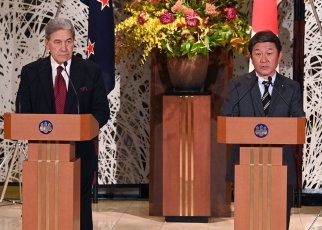 1. At the outset, Minister Motegi stated, “I would like to express my gratitude to Governor-General Dame Patsy Reddy for attending the Ceremony of the Enthronement of His Majesty the Emperor,” “Thank you for your condolences and sympathy towards the devastation caused by Typhoon Hagibis,” “We are grateful for the outstanding performances by the All Blacks, and the New Zealander players and the coach of the Brave Blossoms, which have made the Rugby World Cup extremely exciting.”

2. Regarding bilateral relations, Minister Motegi mentioned that the “Strategic Cooperative Partnership” between Japan and New Zealand has been further elevated by Prime Minister Ardern’s visit to Japan in September. The Ministers shared the view that they will further strengthen the bilateral relationship in a wide range of areas, including security, the economy through the steady implementation and expansion of the Comprehensive and Progressive Agreement for Trans-Pacific Partnership (TPP11), along with people-to-people exchanges. In addition, the Ministers shared the view on making tangible progress with their joint study toward negotiations for an agreement on security information sharing.

3. Concerning cooperation on the Pacific Islands region, which was the main topic of this meeting, Minister Motegi stated, “Japan attaches importance to the Pacific Islands region as a key region for achieving a free and open Indo-Pacific. Japan has decided to enhance its engagement in this region through a whole-of-country approach, and under this policy, Japan has bolstered its efforts to support the region’s self-reliant and stable development, focusing on ensuring stability and safety, addressing maritime issues, strengthening connectivity through quality infrastructure investment, as well as reducing disaster risks and combating climate change.” Minister Motegi stated that Japan looks forward to advancing concrete partnership with New Zealand, which is implementing “Pacific Reset.” The Ministers shared the view on deepening coordination between the two countries, and issued a joint declaration regarding cooperation in this region.

4. The Ministers also exchanged views on other regional issues including the East and South China Seas, and North Korea, and confirmed their continued cooperation. Minister Motegi asked for New Zealand’s continued understanding and cooperation toward the early resolution of the abductions issue.

5. Furthermore, the Ministers had a candid discussion on economic and trade issues including RCEP and TPP 11, as well as the upcoming G20 Foreign Ministers’ meeting.

6. The Ministers also exchanged respective views on the whaling issues.