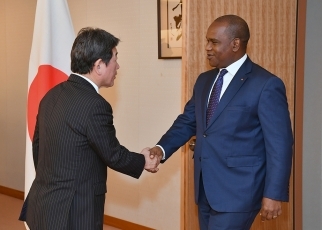 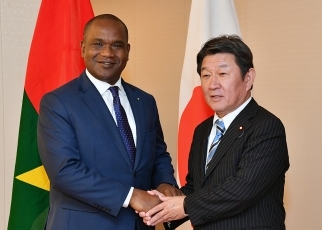 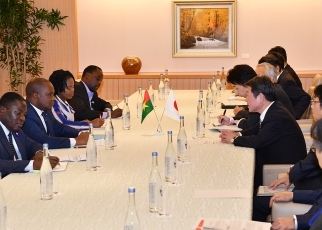 On October 21, commencing at 1:30 p.m. for approximately 30 minutes, Mr. MOTEGI Toshimitsu, Minister for Foreign Affairs of Japan, held a Foreign Ministers’ Meeting with H.E. Mr. Alpha Barry, Minister of Foreign Affairs and Cooperation of Burkina Faso, who was visiting Japan. The overview of the meeting is as follows.

1. Opening remarks
Minister Motegi welcomed Minister Barry’s fourth visit to Japan since last October and said “The Seventh Tokyo International Conference on African Development (TICAD7) in August was successfully convened with the participation of President Kaboré and Minister Barry.”
In response, Minister Barry expressed his deep condolences to victims by Typhoon No.19 (Hagibis) and commended the successful TICAD7 last August.

2. Bilateral relations
Minister Motegi remarked, “I welcome the signing of an Exchanges of Notes for a grant aid to develop road infrastructure environment and food assistance. The road equipment to be provided will improve Burkina Faso’s road infrastructure environment and contribute to enhancing the connectivity of West Africa. I hope Burkina Faso will make effective use of the equipment.” Furthermore, Minister Motegi welcomed the signing of a Memorandum of Understanding on cooperation for the promotion of Japanese private sector’s investment in Burkina Faso between the Japan External Trade Organization (JETRO) and the Investment Promotion Agency of Burkina Faso (API-BF) on the occasion of TICAD7.
In response, Minister Barry expressed his gratitude on Japan’s unwavering continued development and humanitarian assistance to Burkina Faso and hoped Japan would continue to support Burkina Faso in areas such as road infrastructure, education and agriculture.

3. Situation in the Sahel region
Minister Motegi said, “The peace and stability of the Sahel region rest on the shoulders of Burkina Faso, the Chair of the G5 Sahel. Japan will back up the efforts made by Burkina Faso in the fight against terrorism. Furthermore, Japan, as announced at TICAD7, will work in cooperation with Africa-led initiative, such as the G5 Sahel”.
In response, Minister Barry explained an acute increase of internally displaced people in Burkina Faso brought by worsening security situation in the Sahel region. Minister Barry commended Japan’s initiative on the promotion of Peace and Stability in Africa announced at TICAD7 and reiterated his expectation on Japan’s assistance in this field.

4. Other
Minister Motegi sought understanding and cooperation on the early resolution of the abductions issue, and Minister Barry offered his support for the position of Japan.