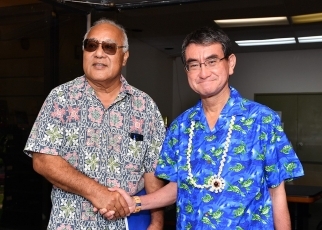 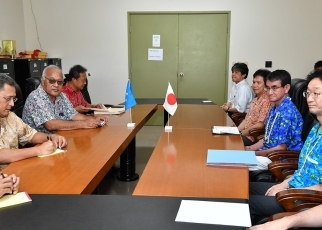 On August 7, commencing at 3:45 p.m. (local time; 1:45 p.m. JST) for approximately 20 minutes, Mr. Taro Kono, Minister for Foreign Affairs of Japan, held a meeting with Hon. Lorin S. Robert, Secretary of Foreign Affairs of the Federated States of Micronesia, in its capital city of Palikir. The overview of the meeting is as follows.

1. At the beginning, Minister Kono stated to Secretary Robert that his visit marks the first visit to Micronesia by a Japanese Foreign Minister, and that he was glad to be able to visit Micronesia, a friend with historical ties going back over 100 years.

3. Minister Kono stated that Japan has decided to strengthen the commitment to Pacific Island countries aimed at achieving a Free and Open Indo-Pacific, and that Japan will advance new initiatives focused on the areas of maritime issues, connectivity through quality infrastructure development, climate change measures, and disaster risk reduction, which were welcomed and appreciated by Secretary Robert.

4. In light of requests from Pacific Island countries, the Ministers confirmed that the PALM Ministerial Interim Meeting will be held in Fiji in mid-2020. Minister Kono asked for Secretary Robert’s cooperation towards a successful meeting.

5. In addition, the Ministers confirmed bilateral cooperation in wide-ranging areas, including fisheries, collection of the war dead remains, and people-to-people exchanges.