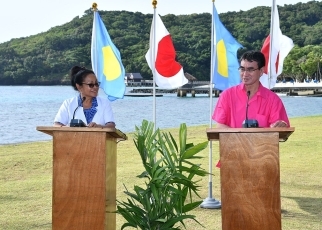 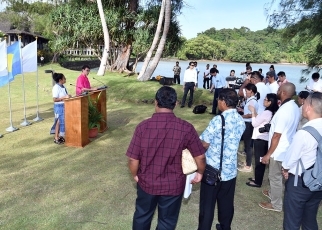 On August 6, commencing at 3:40 p.m. (local time; same time, JST) for approximately 25 minutes, Mr. Taro Kono, Minister for Foreign Affairs of Japan, held a meeting with the Hon. Faustina K. Rehuher-Marugg, Minister of State of the Republic of Palau, in Koror, Palau. The overview of the meeting is as follows.

1. At the outset, Minister Kono stated that this is the first visit by a Japanese Foreign Minister to Palau and that he is delighted to be visiting Palau, a longstanding friend of Japan, in this year that commemorates the 25th anniversary of the establishment of diplomatic relations between Japan and Palau.

3. Minister Kono stated that Japan has decided to strengthen the commitment to Pacific Island countries towards the realization of a “Free and Open Indo-Pacific”, that Japan will implement various new initiatives, centered on maritime issues, connectivity, climate change countermeasures and disaster risk reduction, and reported on the following concrete initiatives, which Minister Rehuher-Marugg welcomed and appreciated.

(1) Minister Kono announced cooperation for the Our Ocean Conference, to be held in Palau next year, and the two ministers discussed concrete cooperation.

(2) Regarding the tourism sector, Minister Kono conveyed the attractiveness of Palau, and the two ministers discussed cooperation for attracting more tourists.

(4) Minister Kono reported on the dispatch of Japanese high school students to Palau for the first time this month, under the framework of JENESYS, in order to promote people-to-people exchange among the younger generation. Furthermore, Minister Kono announced the invitation of children from Pacific Island countries to the Tokyo Olympic and Paralympic Games next year.

(5) Minister Kono confirmed that, based on the request of the Pacific Island countries, the PALM Ministerial Interim Meeting will be held in Fiji in mid-2020, and requested the cooperation of Minister Rehuher-Marugg for its success.

4. The two ministers confirmed their cooperation in regard to the challenges faced by the international community, including North Korean affairs and affirmed that they will work closely together to further strengthen the historically friendly and cooperative relations between Japan and Palau.

5. In addition, Minister Rehuher-Marugg expressed her intention to foster a positive relationship with Mr. Akira Karasawa, the newly appointed Ambassador of Japan to Palau.