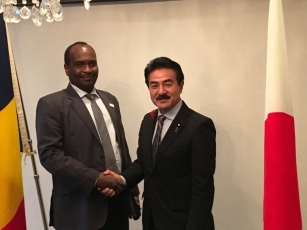 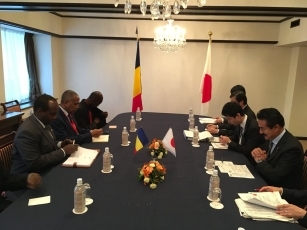 On October 7, commencing at around 5:10 p.m. for approximately 30 minutes, Mr. Masahisa Sato, State Minister for Foreign Affairs, met with H.E. Mr. Hissein Tahir Souguimi, Secretary of State for Economy and Planning of the Republic of Chad, who is visiting Japan to attend the Tokyo International Conference on African Development (TICAD) Ministerial Meeting. The overview of the meeting is as follows.

1. In opening statements, State Minister Sato expressed appreciation for the hospitality he had received during his visit to Chad in May, and sincerely welcomed Secretary Tahir’s attendance at the TICAD Ministerial Meeting. In addition, he stated that Japan places emphasis on cooperative relations with Chad, which are contributing to regional stability, including in the G5 Sahel region.

2. State Minister Sato also noted that Japan would provide food assistance for improving food security as well as contribute to human resources development in Chad, such as the African Business Education (ABE) Initiative.

3. Secretary Tahir expressed gratitude for the warm hospitality he had received in Japan and for Japan’s assistance extended to Chad to date, and promised Chad’s cooperation towards TICAD 7 next year. He also noted that Japan’s sustained assistance is important for counter terrorism and security improvement as well as national development in Chad, and expressed his hope that Japan’s assistance would continue.

4. In addition, the two Ministers held an exchange of views regarding cooperation in the international arena including the North Korea situation and Security Council reform.