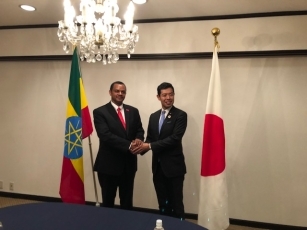 On October 6, commencing at around 6:25 p.m. for approximately 25 minutes, Mr. Kiyoto Tsuji, Parliamentary Vice-Minister for Foreign Affairs, held a meeting with H.E. Prof. Afework Kassu Gizaw, State Minister of Foreign Affairs of the Federal Democratic Republic of Ethiopia, who visited Japan to attend the Tokyo International Conference on African Development (TICAD) Ministerial Meeting. The overview of the meeting is as follows.

1. At the outset, Parliamentary Vice-Minister Tsuji sincerely welcomed State Minister Afework’s attendance at the TICAD Ministerial Meeting. He also welcomed the domestic peaceful reforms implemented by Prime Minister Abiy, and also the reestablishment of diplomatic relations between Ethiopia and Eritrea in July. Furthermore, he mentioned about Japan’s assistance to Ethiopia, including the provision of grant aid for access to safe water which was signed in August.

2. State Minister Afework stated that Ethiopia places importance on the long diplomatic relations with Japan, and expressed his appreciation for Japan’s assistance to Ethiopia. He also promised to cooperate towards TICAD 7 next year.

3. Parliamentary Vice-Minister Tsuji stated that Japan also places importance on relations with Ethiopia, as it plays a major role in the peace and stability in the Horn of Africa region. He also expressed the importance of the conclusion of the investment treaty and improvement of visa issuance procedure to motivate Japanese companies to invest in Ethiopia, taking note of H.E. Amb. Seyoum, Special Envoy of the Prime Minister’s remarks when he visited Japan in August, as he expressed his expectations for Japanese companies to invest in Ethiopia.

4. In addition, both Ministers exchanged their views on cooperation in the international arena such as the North Korea situation including the abductions issue, as well as Security Council reform.