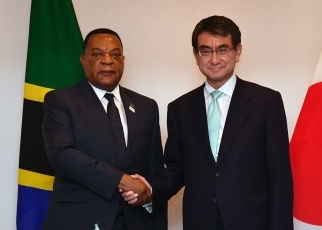 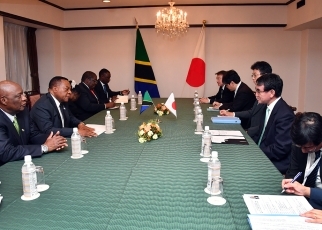 On October 7, commencing at 7 p.m. for approximately 25 minutes, Mr. Taro Kono, Minister for Foreign Affairs, held a Foreign Ministers’ Meeting with the Hon. Dr. Augustine Philip Mahiga, Minister of Foreign Affairs and East African Cooperation of the United Republic of Tanzania, who is visiting Japan for the Tokyo International Conference on African Development (TICAD) Ministerial Meeting. The overview of the meeting is as follows.

1. At the outset, Minister Kono wholeheartedly welcomed Minister Mahiga’s participation in the TICAD Ministerial Meeting. In addition, he stated that Japan places importance on cooperative relations with Tanzania, which supports peace and stability in Eastern Africa, and that he would like to continue to strengthen bilateral relations.

2. Following that, Minister Kono expressed the intention to provide yen loans for road improvement and improvement of water supply system. In addition, he indicated that Japan would support to improve the port in Tanzania. In response, Minister Mahiga expressed gratitude for Japan’s support for Tanzania, including the Project for Improvement of Tazara Intersection which is currently being implemented and the ABE Initiative.

3. Further, Minister Kono stated that he would like to advance negotiations for a bilateral investment treaty to support market entry by Japanese companies, and both ministers confirmed that they would cooperate toward concluding the treaty. Minister Mahiga expressed expectations for even more vigorous market entry in Tanzania by Japanese private companies in the future, including in the tourism field.

Besides this, the Ministers exchanged views on cooperation in the international arena, including the North Korea situation and Security Council reform. Both Ministers confirmed the importance of continuing to ensure the complete implementation of the Security Council Resolutions toward the denuclearization of the Korean Peninsula.