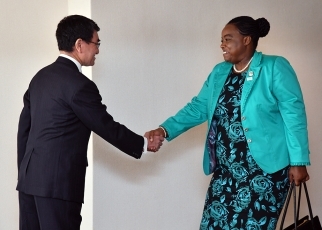 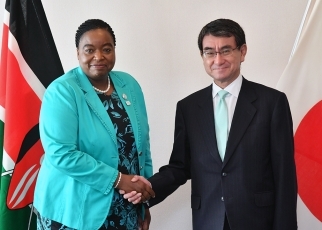 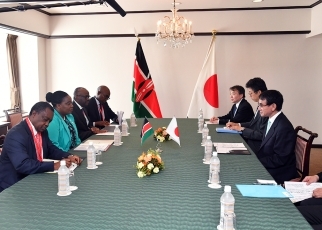 On October 7, commencing at 9:10 a.m. for approximately 20 minutes, Mr. Taro Kono, Minister for Foreign Affairs, held a Foreign Ministers’ Meeting with H.E. Amb. Monica Juma, Cabinet Secretary for Foreign Affairs of the Republic of Kenya, who is visiting Japan for the Tokyo International Conference on African Development (TICAD) Ministerial Meeting. The overview of the meeting is as follows.

1. At the outset, Minister Kono wholeheartedly welcomed Cabinet Secretary Juma’s participation in the TICAD Ministerial Meeting. He also stated that he would like to continue to strengthen cooperation with Kenya, which is the gateway to East Africa where Mombasa Port is located, and is Japan’s most important partner for promoting a Free and Open Indo-Pacific. In addition, he referenced that Japan has accepted 150 people from Kenya as ABE Initiative trainees.

2. Following that, Cabinet Secretary Juma expressed the importance of Japan’s support including the development of Mombasa Port, and referenced the possibilities for further cooperation with Japan for the blue economy which leads to sustainable development, renewable energy and fostering human resources etc. She also expressed gratitude for Japan’s contributions for peace and stability of the East Africa region. Furthermore, she promised cooperation toward TICAD7 next year.

3. In addition, both Ministers welcomed active engagement by Japanese companies in Kenya, and confirmed the importance of improving the business environment for further strengthening economic relations between both countries.

4. Besides, the Ministers exchanged views oncooperation in the international arena, such as the North Korea situation including the abductions issue, and Security Council reform.