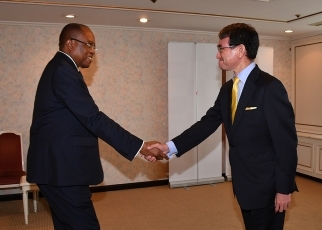 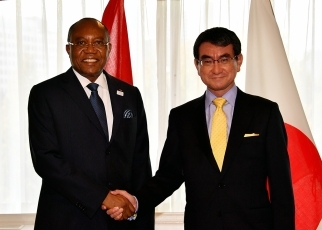 On October 6, commencing at 12:40 p.m. for approximately one hour, Mr. Taro Kono, Minister for Foreign Affairs, held a Foreign Ministers’ Meeting (luncheon) with H.E. Mr. Manuel Domingos Augusto, Minister of External Relations of the Republic of Angola, who is visiting Japan for the Tokyo International Conference on African Development (TICAD) Ministerial Meeting. The overview of the meeting is as follows.

1. At the outset, Minister Kono welcomed Minister Augusto’s visit to Japan. Minister Kono mentioned that he is aware that H.E. Mr. João Manuel Gonçalves Lourenço, President of the Republic of Angola, in his inauguration speech in September 2017, referred to Japan as a country which he would like to reinforce relations. Minister Kono stated that Japan also places importance on relations with Angola. In response, Minister Augusto conveyed President Lourenço’s hope to expand strategic relations with Japan. Minister Augusto also stated that he would like to further promote exchange of visits by high level officials of Japan and Angola, and promised to cooperate toward TICAD7 which will be held next year.

2. Furthermore, Minister Kono stated that Japan would like to advance initiatives toward improving the legal framework for further promoting economic relations between Japan and Angola, and introduced the latest activities of Japanese companies in Angola, including the submarine cable system project. In response, Minister Augusto welcomed the activities by Japanese companies and showed his position that he would like to actively work to further promote economic relations between Japan and Angola.

3. The two Ministers exchanged views on cooperation in the international arena, such as the North Korea situation including the abductions issue. The two Ministers confirmed the importance of continuing to ensure the complete implementation of the Security Council Resolutions toward the denuclearization of the Korean Peninsula. In addition, Minister Kono requested understanding and cooperation toward the immediate resolution of the abductions issue, and received the support of Minister Augusto.