Top > News > Press Releases > Meeting between Parliamentary Vice-Minister Tsuji and Minister of State in the Ministry of Foreign Affairs, Cooperation and East African Community Nduhungirehe of the Republic of Rwanda

Meeting between Parliamentary Vice-Minister Tsuji and Minister of State in the Ministry of Foreign Affairs, Cooperation and East African Community Nduhungirehe of the Republic of Rwanda 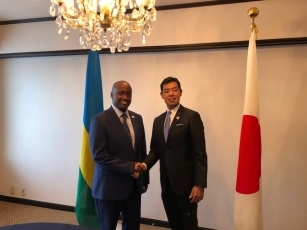 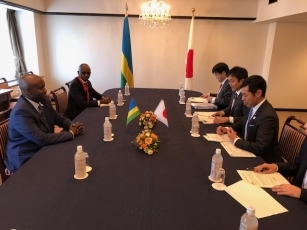 On October 6, commencing at around 3:45 p.m. for approximately 30 minutes, Mr. Kiyoto Tsuji, Parliamentary Vice-Minister for Foreign Affairs, held a meeting with the Hon. Amb. Olivier Nduhungirehe, Minister of State in the Ministry of Foreign Affairs, Cooperation and East African Community of the Republic of Rwanda, who was visiting Japan to attend the Tokyo International Conference on African Development (TICAD) Ministerial Meeting. The overview of the meeting is as follows.

1. At the outset, Parliamentary Vice-Minister Tsuji sincerely welcomed Minister Nduhungirehe’s attendance at the TICAD Ministerial Meeting. He also noted that there is a growing momentum towards expanding trade and investment between the two countries, with a steady progress in infrastructure development, including roads and power generation, human resources development in the ICT sector, as well as many Japanese companies participating in the Public and Private Sector Joint Mission for Promoting Trade and Investment in Africa in July.

2. Parliamentary Vice-Minister Tsuji also noted that stable energy supply is important in order to promote investment, including in the ICT sector, and referred to the signing in September 2018 of an exchange of notes of a grant project amounting up to 2.6 billion yen to support improvement of a substation and power distribution network in Kigali, as well as Japan’s contributions to human resources development.

3. In response, Minister Nduhungirehe expressed appreciation for Japan’s assistance to Rwanda, including in the power sector, and promised to cooperate towards TICAD 7 next year. He also emphasized the importance of investment for Rwanda’s economic development. Referring to the successful visit to Japan in March of the Hon. Jean de Dieu Rurangirwa, Minister of ICT of Rwanda, Minister Nduhungirehe stated that he hoped that the bilateral relations would be strengthened further through more frequent mutual visits of senior officials between the two countries.

4. In addition, the Ministers exchanged their views on cooperation in the international arena including the North Korea situation and the United Nations Security Council reform.