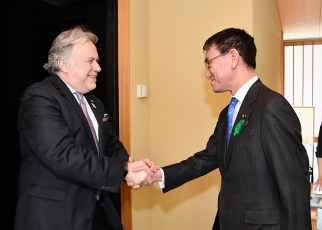 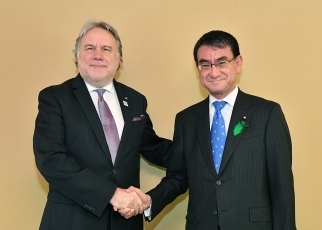 On April 16, commencing at 13:15 p.m. for approximately 60 minutes, Mr. Taro Kono, Minister for Foreign Affairs of Japan, held a meeting with H.E. Mr. George Katrougalos, Minister of Foreign Affairs of the Hellenic Republic, who was visiting Japan. The overview of the meeting is as follows.

1. Bilateral relations
The two ministers confirmed that they will strengthen political dialogues and exchanged views on bilateral trade relations which are expected to expand since the entry into force of the Japan-EU EPA as well as further development of investment climate. They also shared the view to promote people-to-people exchanges, seizing the opportunity of the 120th Japan-Greece Friendship Year and the 2020 Tokyo Olympic and Paralympic Games.

2. Maritime cooperation
The two ministers confirmed that Japan and Greece, both maritime nations, will cooperate and actively contribute to maintaining and strengthening free and open maritime order based on the rule of law.

3. Regional situations
The two ministers exchanged views on topics such as the situation in East Asia, Balkans and Cyprus issues.