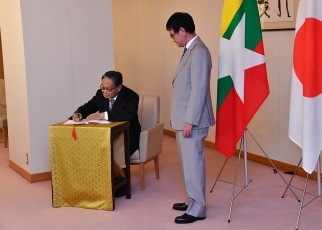 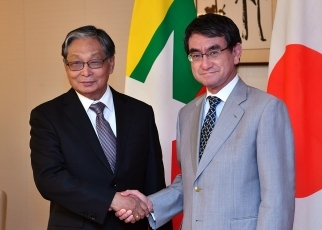 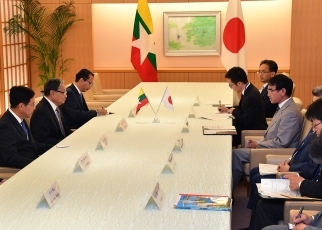 On May 31, Mr. Taro Kono, Minister for Foreign Affairs of Japan, held a meeting with H.E. Mr. Kyaw Tint Swe, Union Minister for the Office of the State Counsellor, Republic of the Union of Myanmar, during his visit to Japan. (The meeting commenced at 5:20 p.m. for approximately 40 minutes)

1. Minister Kono began by expressing his pleasure to see Minister Kyaw Tint Swe again and his appreciation for the messages from State Counsellor Aung San Suu Kyi and Ambassador Extraordinary and Plenipotentiary to Japan Thurain Thant Zin to the bereaved family of the late Mr. Satoshi Oyama, an official of the Ministry of Foreign Affairs of Japan. In response, Minister Kyaw Tint Swe stated that Japan and Myanmar have been close friends and expressed his deepest condolences to the bereaved family of Mr. Oyama.

2. Minister Kono stated that Japan would continue to provide full-fledged support for Myanmar’s democratic nation building. With regard to the peace process in Myanmar, Minister Kono expressed his appreciation for the continuation of the suspension of military activities in the northeastern part of Myanmar, and said that he would continue to fully support the development of the peace process together with Mr. Yohei Sasakawa, Special Envoy of the Government of Japan for National Reconciliation in Myanmar. Minister Kono further stated the importance of the respect for universal values in democratic nation building, including the freedom of the press, and welcomed the recent release of the two Reuters reporters. In response, Minsiter Kyaw Tint Swe replied that the Myanmar Government led by State Counsellor Aung San Suu Kyi was striving for making progress in and consolidating democracy and establishing federalism, and expressed his appreciation for Japan’s full-fledged support.

3. Regarding the situations of Rakhine State, Minister Kono strongly urged Minister Kyaw Tint Swe that the Myanmar government ensure progress in the activities by the Independent Commission of Enquiry (ICoE), and take appropriate measures accordingly. Furthermore, Minister Kono requested that the Myanmar Government urgently make progress on creating environment conducive to repatriation of the displaced persons, in cooperation of the United Nations, and promptly hold briefings to the displaced persons in Bangladesh, including on security, freedom of movement, and a clear pathway towards ensuring citizenship verification. In addition, Minister Kono encouraged ensuring constant humanitarian access in the northern part of Rakhine State, the appropriate closure of the camps for internally displaced persons around Sittwe and their resettlement, and the continued cooperation with the ASEAN, including the activities of the ASEAN Coordinating Centre for Humanitarian Assistance on Disaster Management (AHA Centre).

4. In response, Minister Kyaw Tint Swe stated that the Myanmar Government placed importance on human rights and had a policy to take appropriate measures according to law against those who had committed crimes, that based on this belief, it had established the ICoE, and that it was important for the ICoE to write a comprehensive and evidence-based report. With regard to the repatriation, he stated that Myanmar would work for repatriation of the people in the Bangladesh side according to the bilateral agreement between Myanmar and Bangladesh, and was ready to accept all those who had resided in Myanmar.

5. Following this, on the issue of the peace process, Minister Kono expressed his strong hope that the suspension of military activities by the Myanmar military would lead to a permanent ceasefire, including with the Kachin Independence Army, and the repatriation and resettlement of displaced persons. In response, Minister Kyaw Tint Swe stated that all the people of Myanmar were wishing for progress in the peace process, and that the Myanmar Government was negotiating particularly with the non-signatory ethnic armed organizations in the northern part of Myanmar, and expressed his appreciation for the assistance of Japan including Special Envoy Sasakawa.

6. Lastly, Minister Kono stated that Japan would continue to firmly cooperate with the efforts by the Myanmar government, and in response, Minister Kyaw Tint Swe expressed his hope for Japan’s continued support.