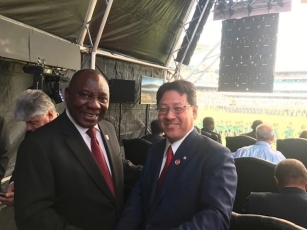 1. Mr. Seki attended the Presidential Inauguration Ceremony held at the Loftus Versfeld Stadium in Pretoria, South Africa’s capital. At the ceremony, President Ramaphosa took the oath and made his inauguration speech in front of dignitaries of the South African government, foreign dignitaries including heads of state from African countries, and the people of South Africa.

3. Mr. Seki had short conversations with dignitaries including heads of state of African countries as well as special envoys from non-regional countries on the occasion of the Presidential Inauguration Ceremony.