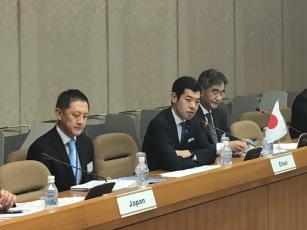 1. Ministry of Foreign Affairs of Japan hosted the 15th Asia Senior-Level Talks on Non-Proliferation (ASTOP) on March 19 and 20 in Tokyo. Senior government officials in charge of non-proliferation policies from the ten ASEAN member states, China, India, the Republic of Korea, Australia, Canada, France, New Zealand, the United States, and Japan participated in the meeting.

2. In his opening remarks, Parliamentary Vice-Minister for Foreign Affairs Kiyoto Tsuji stated that the proliferation of weapons of mass destruction (WMD) and their means of delivery to and from states as well as non-state actors of proliferation concern still poses a grave threat, and reiterated the need for the international community to cooperate and advance non-proliferation efforts.

3. The participants actively exchanged views mainly on the following topics:

(1) Efforts and challenges in strengthening export control and cooperation in capacity building;

(2) Recent developments in the Proliferation Security Initiative (PSI) and the IAEA Safeguards and the Additional Protocol; and

(3) Non-proliferation efforts and achievements of the past 15 years