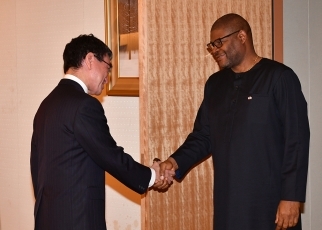 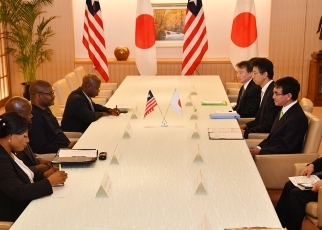 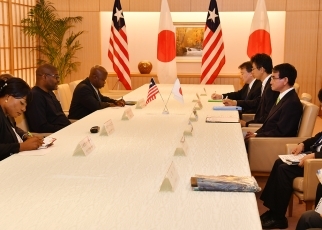 On October 5, commencing at 3:40 p.m. for approximately 20 minutes, Mr. Taro Kono, Minister for Foreign Affairs of Japan, held a Foreign Ministers’ Meeting with Hon. Mr. Gbehzohngar M. Findley, Minister of Foreign Affairs of the Republic of Liberia, who is visiting Japan for the Tokyo International Conference on African Development (TICAD) Ministerial Meeting. The overview of the meeting is as follows.

1. At the outset, Minister Kono wholeheartedly welcomed Minister Findley’s attendance at the TICAD Ministerial Meeting. In addition, Minister Kono referred to the attendance of Mr. Masahisa Sato, State Minister for Foreign Affairs, as the Prime Minister’s Special Envoy, at the inauguration ceremony of the Liberian President in January 2018 and expressed his intention to further strengthen the friendly relationship of the two countries.

2. Following that, Minister Findley expressed his gratitude for Minister Kono’s welcome, and promised cooperation toward the success of TICAD 7 next year.

3. Furthermore, Minister Kono expressed his intention to extend food assistance to Liberia and, in response, Minister Findley expressed his gratitude for Japan’s assistance to Liberia, such as the food assistance and the ongoing “Project for Reconstruction of Somalia Drive in Monrovia.” The two Ministers exchanged views on the possibility of strengthening the bilateral cooperation in various fields, such as economy, infrastructure and public health.