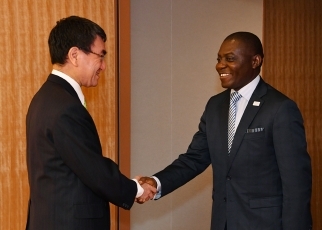 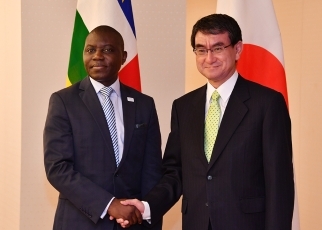 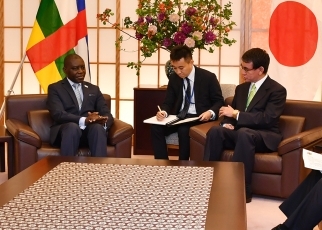 On October 5, commencing at 4:10 p.m. for approximately 15 minutes, Mr. Taro Kono, Minister for Foreign Affairs of Japan, held a meeting with H. E. Mr. Charles Armel Doubane, Minister of Foreign Affairs and Central Africans Abroad of the Central African Republic, during his visit to Japan to attend the Tokyo International Conference on African Development (TICAD) Ministerial Meeting. The overview of the meeting is as follows.

1. At the outset, Minister Kono wholeheartedly welcomed Minister Doubane’s attendance at the TICAD Ministerial Meeting. He also stated that, in May 2018, Mr. Masahisa Sato, State Minister for Foreign Affairs, paid the first visit to the Central African Republic as a Japanese representative in 34 years and expressed his willingness to enhance the relationship of the two countries.

2. Following that, Minister Doubane expressed his gratitude for Minister Kono’s welcome and his intention to work together for the success of TICAD VII next year.

3. Furthermore, Minister Kono referred to both the food assistance of 350 million yen, of which the Exchange of Notes was signed in August, and to the grant aid of approximately 240 million yen in collaboration with the United Nations Development Programme (UNDP), of which the Exchange of Notes was signed in October, with a view to supporting activities, including vocational training, for returning soldiers and internally displaced persons toward their social and economic integration. In response, Minister Doubane expressed his appreciation for Japan’s assistance to the country in bilateral and multilateral manner , The Minister explained the country’s ongoing efforts to realize national peace and stability, and expressed his hopes for Japan’s continuous support. In response, Minister Kono stated that Japan would continue to extend cooperation in various ways for the development of the Central African Republic.