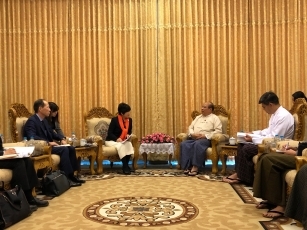 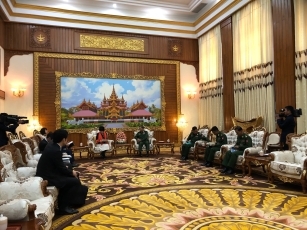 From January 14 to 16, Ms. Toshiko Abe, State Minister for Foreign Affairs visited Republic of the Union of Myanmar.

(1) Situation of Rakhine State
At the beginning, State Minister Abe stated that the Japanese government’s policy was to think together with the Myanmar government and to provide utmost support for its efforts to resolve various challenges including the issue of Rakhine State. She also expressed that Japan hoped that the return of the displaced persons would take place in a safe, voluntary and dignified manner, with UN cooperation. Subsequently, State Minister Abe encouraged the Myanmar side to make progress on cooperation with the UN in order to create conducive environment for repatriation, to demonstrate the progress to the international community in a visible way and to close the internally displaced persons (IDP) camps in an appropriate manner while assuring their safety and freedom of movement. Regarding these issues, she expressed the Japanese government’s desire to cooperate as much as they could with the Myanmar government. In addition, she noted that the Japanese government would implement its assistance taking into consideration all relevant communities.
She stated that Japan placed significance on that the Myanmar government would ensure credibility and transparency of the investigation by the Independent Commission of Enquiry (ICoE) and take appropriate measures based on the findings and once again called on the Myanmar government to cooperate with the ICoE.
She called on the Myanmar side to take appropriate actions regarding the case involving the detained Reuters journalists.
In response, the Myanmar side replied that the Myanmar government attached importance on the resolution of the issue of Rakhine State. It explained the progress of creation of environment for the return of the displaced persons, the repatriation process and the collaboration with stakeholders including UN agencies and ASEAN. It stated that it would like to make additional efforts for the development of Rakhine State as a whole based on the needs of the local residents. In addition, it expressed strong expectation for Japan’s continuous support.
Moreover, with regard to the case of the Reuters journalists, it replied that the Myanmar government would take actions in accordance with the process based on the rule of law.

(2) Peace Process
State Minister Abe stated to Commander-in-chief Senior General Min Aung Hlaing that Japan welcomed the Myanmar military’s announcement released last December on the halt of all its military activities against the ethnic armed organizations in the northeast Myanmar for 4 months. She encouraged the Myanmar military to promptly ensure humanitarian access to the areas and to make progress on peace process. She also stated that the Japanese government would continue to support Myanmar’s efforts for national reconciliation along with Mr. Yohei Sasakawa, Special Envoy of the Government of Japan for National Reconciliation in Myanmar.
In response, Commander-in-chief Senior General Min Aung Hlaing replied that with regard to the peace process, he would hold dialogue with the ethnic armed organizations with a view to bringing about signing of the ceasefire agreement and realizing peace without delay.

(2) On 15 January (same day in local time), State Minister Abe met with the officials of UN agencies based in Yangon and had discussion on issues including the situation of Rakhine State.

(3) On 15 and 16 January (same days in local time), State Minister Abe visited the Yangon Japanese School and the Japanese Department of Yangon University of Foreign Languages and interacted with the students.