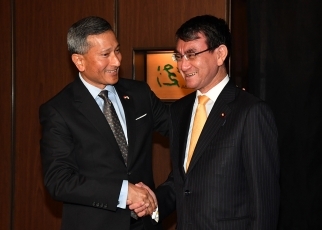 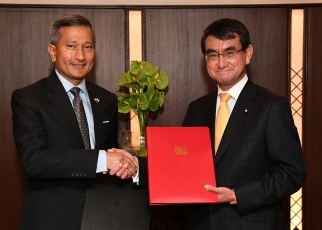 On December 4, commencing at 7:25 p.m. for approximately one hour and 30 minutes, Mr. Taro Kono, Minister for Foreign Affairs, held a Foreign Ministers’ meeting over dinner with H.E. Dr. Vivian Balakrishnan, Minister for Foreign Affairs of the Republic of Singapore, who is visiting Japan. The overview of the meeting is as follows. Before this meeting, the two ministers signed a revised Memorandum of Discussion (MOD) for the Japan-Singapore Partnership Programme for the 21st Century (JSPP 21).

1. Minister Kono welcomed Minister Balakrishnan’s visit to Japan, expressed his respect for Singapore’s chairmanship of ASEAN in 2018. Minister Kono expressed his gratitude for the warm reception when Prime Minister Abe and Minister Kono visited Singapore respectively, and also stated that Japan will use Singapore’s management method of the meetings as a good example for the G20 summit meetings in next year. In response, Minister Balakrishnan stated that he was pleased to be able to visit Japan, he was grateful for the contribution of Japan to the series of meetings related to ASEAN, and he intended to continue strengthening bilateral relationship.

2. Furthermore, the two ministers exchanged views regarding the regional situation, including the issue of North Korea, South China Sea issue, and the situation of Rakhine State in Myanmar, as well as the promotion of free trade, in particular TPP 11 and RCEP, and agreed that they would continue working closely together. In particular, regarding the issue of North Korea, the two ministers shared the view that full implementation of UN Security Council resolutions is necessary towards the denuclearization of the Korean Peninsula. Minister Balakrishnan also expressed his understanding and support towards the early resolution of the abductions issue.

(1) This is a program in which Japan and Singapore cooperate to provide technical cooperation to third countries. It was implemented from 1994 as JSPP and in 1997 a consensus document for JSPP 21 based on an equal partnership was signed. Trainees invited from countries in Asia, Oceania, the Middle East, and Africa, etc. were trained in Singapore under JSPP21.

(3) In the revised MOD signed before this meeting, the strengthening of connectivity and the rule of law are added as objectives of this Programme, and areas of training in line with these objectives are included in the priority areas for training.