Signing of the Japan-Jordan Investment Agreement 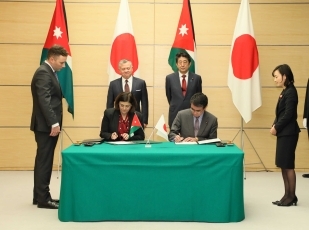 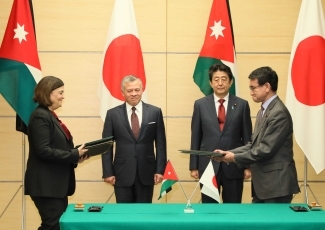 1. On November 27, Mr. Taro Kono, Minister for Foreign Affairs of Japan, and H.E.Dr. Mary Kawar, Minister of Planning and International Cooperation of the Hashemite Kingdom of Jordan, signed the “Agreement between Japan and the Hashemite Kingdom of Jordan for the Promotion and Protection of Investment” (the Japan-Jordan Investment Agreement) (English (PDF)

) in Tokyo in the presence of Mr. Shinzo Abe, Prime Minister of Japan and His Majesty King Abdullah II ibn Al Hussein, King of the Hashemite Kingdom of Jordan.

3. Jordan has achieved stable economic growth in recent years. It carries out development projects of the Government of Jordan in a variety of sectors, and Japanese enterprises are increasingly investing in Jordan, primarily in the renewable energy sector. This Agreement is expected to promote the improvement of the investment climate and achieve closer economic relations between the two countries.

4. The Contracting Parties will notify each other of the completion of their respective internal procedures necessary for the entry into force of this Agreement (in case of Japan, the approval ot the National Diet will be required). This Agreement will enter into force on the thirtieth day after the latter of the dates of receipt of the notifications.